Clint Eastwood to GOP: Get Off My Lawn 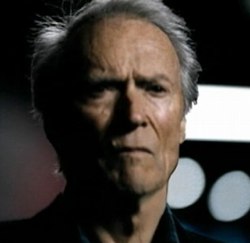 A gaggle of right-wing functionaries is furious with Clint Eastwood and Chrysler, with no less than Karl Rove calling out the actor-director-inspirational halftime huckster for a Super Bowl ad that Rove and others perceived as a thinly veiled reelection endorsement for President Obama. Wait, what?

The shit hit the fan Monday afternoon when Rove took to Fox News to protest the epic TV spot, arguing that... honestly, I have no idea. Big Hollywood's John Nolte offered the most succinct explanation of conservative outrage -- "Because Obama’s decided to eliminate moral hazard and socialize losses for anyone who employs the unions who fund his campaigns, Chrysler obviously wrote a thinly veiled thank you in the form of a reelection ad for their benefactor, and convinced a Republican icon to deliver it" -- but things just got straight-up surreal with Rove (via EW):

"Chicago-style politics"? Excuse me? If anything, this is Detroit politics (or economics, really), and to think Eastwood would just overlook the potential implications therein for the simple sake of a rah-rah Super Bowl message is to underestimate a pretty smart guy who once made it a two-year mission of his life to emphasize the benefits of business over politics.

Anyway, Eastwood's manager offered a beleaguered defense ("People have to understand that what he was doing was saying to America, 'Get yourselves together – all of you – and make this a second half.' It's not a political thing"), but the best part came when Eastwood himself reached out to O'Reilly Factor producer Ron Mitchell to defuse the conspiracy theories, hype, conjecture, invective and the rest of it:

"I just want to say that the spin stops with you guys, and there is no spin in that ad. On this I am certain.

l am certainly not politically affiliated with Mr. Obama. It was meant to be a message about just about job growth and the spirit of America. I think all politicians will agree with it. I thought the spirit was OK.

I am not supporting any politician at this time.

Chrysler to their credit didn’t even have cars in the ad.

Anything they gave me for it went for charity.

If any Obama or any other politician wants to run with the spirit of that ad, go for it."

Love. It. It's like, "Screw you and your panic; there's plenty of room up here for anyone who wants to join me on the high road." Now Obama doesn't have to say a word, and the conservatives are left to either embrace the "let's fix this" spirit that they just implicitly ascribed to the president or oppose it as a matter of ideological course -- which would just reinforce the ad's criticism of "the fog, the division, the discord and blame" crippling our discourse. Whoops! I'm still not buying a Chrysler, but hey. This is turning out all right!