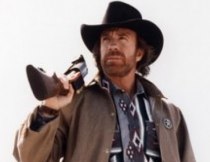 It was cute a few weeks ago, but now it's just sort of embarrassing: "As a six-time undefeated middleweight world karate champion, I have a pretty good idea what makes a warrior. And there’s presently one particular presidential candidate in the political ring who wears those gloves better than the others. Even when he’s knocked down, he has astounding agility and rebound. It’s one thing to enter a ring with a single opponent, but what if you had to enter with three: one candidate with unlimited reservoirs of wealth and two titans of political swing to back him? That is exactly what former Speaker Newt Gingrich is facing right now." [WND]