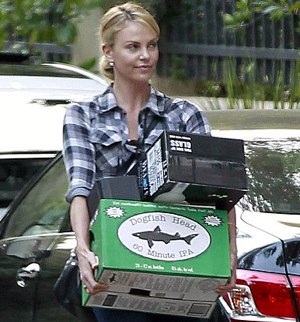 In a world where Spike Lee has his own variety of Absolut and Will Ferrell devotedly shills for Old Milwaukee, it's important to point out when the intersection of celebrities and booze actually results in something encouraging. Take Charlize Theron, who was photographed Sunday carrying some of America's finest craft beer to a Super Bowl party. A whole case of it.

The Delaware brewery Dogfish Head is renowned far and wide for its IPAs, particularly the 60-minute variety of which Theron rocked over the weekend. At 6 percent ABV, it is the brewery's smoothest, least potent IPA; the 90-minute and 120-minute versions top out around 9 percent and 20 percent, each named after the length of the brew's sustained boil and continuous hopping. Which may not mean anything to non-beer enthusiasts, but trust me: After having to sit through five minutes of Super Bowl ads for something called "Bud Light Platinum," little is as refreshing to a connoisseur as seeing an A-list, Oscar-winning actress treat our biggest sporting event as the stepping-up opportunity that it is.

Anyway, Theron should be commended, and may all of Hollywood take note. Also: I will totally lend my likeness out to any brewer needing a little push on upcoming game days. Inquire within. I'm looking at you, Ommegang. Ahem.