REVIEW: The Innkeepers Seeks to Reinvent the Ghost Story by Sheer Force of Ambition 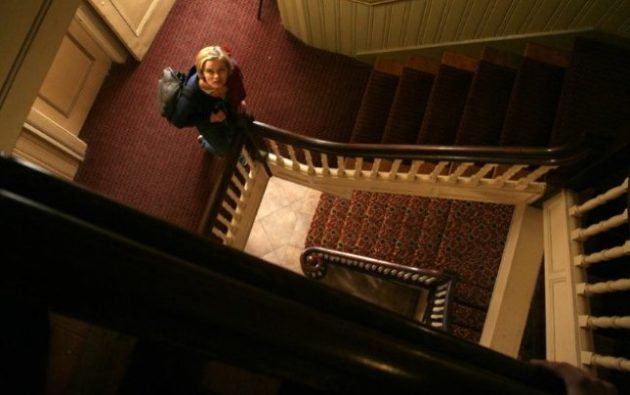 The heroes and heroines of old-fashioned ghost-story flicks resemble the average horror fan more closely than any other of the genre’s archetypes. Amateur ghostbusters like The Innkeepers’s Claire (Sara Paxton), for instance, troll spooky hallways and scour dank basements for thrills, which is to say without the real threat of physical harm. We go to movies like The Innkeepers, Ti West’s follow-up to his delightful old-school creep-out The House of the Devil, to explore and experience fear from a similarly safe remove. Like the average horror fan, Claire can be her own worst enemy; on both sides of the screen, much depends on the question of whether one can be scared to death.

Along with her laconic co-clerk Luke (Pat Healy), winsome, asthmatic Claire is the only staff on site at the Yankee Pedlar Inn during its closing weekend. A grand old establishment with a rumor-laden pedigree, the inn has only a few last guests to deal with, including a harried mother and son (Alison Bartlett and Jake Ryan) and a fading television actress named Leanne Rease-Jones (Kelly McGillis). The fact that a couple of low-ranking attendants have been left to close up the joint adds to the cavernous building’s feeling of abandonment. Like all haunted houses, the emptiness of this one poses a mournful and ominous question: Where did all the people go?

Luke and Claire have an idea of where at least one wound up. The legend of a bride who committed suicide on her wedding day and was left to rot in the inn’s basement fuels their idle, overtime chatter. Luke is working on a crude, paranormal activity-type web site and claims to have seen the undead bride once; Claire, bored and curious, marshals his electronic voice phenomena kit and pokes around for sound vibrations. The first two “chapters” pass congenially, as characters come and go and we’re played for a couple of cheap scares. Unlike Devil, which builds slowly to an almost excruciating peak of tension, The Innkeepers is dotted with dead-end sequences -- a YouTube prank, a bat in the attic -- that break up a sometimes sluggish pace but also promote a certain aimlessness in the narrative.

More so than in West’s previous film, which worked on its own steam right up until the end, The Innkeepers feels like a devoted horror fan’s attempt to reinvent a classic genre by sheer force of quality. Without a strong story to dance with, all of those fabulous tracking shots, lovingly uncanny art direction details and flickering shafts of light can make The Innkeepers feel more like an exercise in craft than a scary movie.

Still, there is pleasure in Paxton’s slightly daffy, tomboyish take on the final girl and in McGillis’s welcome, perfectly anomalous presence. Leanne turns out to be something of a ghost whisperer, and it’s fun watching McGillis sell some pretty fruity lines between pulls on her cigarette. Luke is an intermittent and oddly diffident player in what becomes Claire’s adventure, although they share a pivotal and terrifically frightening séance scene toward the end. He warns Claire that chasing spirits has serious side effects -- you’ll start seeing things everywhere you go, he says, you’ll warp your radar for what’s real and what’s not. It sounds like a statement of ambition for the best kind of ghost story, which is ultimately what The Innkeepers turns out to be.