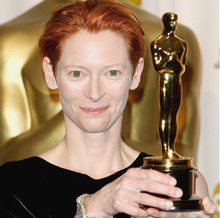 Remember Patton Oswalt's Oscar-snubbee Twitter fan fiction -- specifically the part wherein Tilda Swinton and Andy Serkis rocked out together to "Life on Mars"? Well, Jimmy Fallon or Stephen Colbert or someone might want to get on that, if Swinton's priceless reaction is any indication.

"Oh, how fun! Is he there now?" she said. We explained that it was merely his Twitter feed. "But is it real? We should go! Where is he?" she asked, grabbing for her keys and heading for the door. Actually, we explained, he was kidding. "Oh, he’s making jokes. What a shame. I think we should do it for real. How faaabulous!" she said. When she read the tweet, "Serkis & Tilda are singing 'Is There Life on Mars?'" Swinton said, "That’s a dare! That’s an excellent dare. Okay, Patton, you’re on. Let’s get Andy and let’s go for it!"

Genius. Or maybe Swinton could finally fulfill her promise to portray Conan O'Brien on Conan, introducing her and Serkis? There would not be enough health insurance in the world to cover all the exploded heads.