Kanye West and The Jetsons Movie -- Two Great Tastes That Taste Great Together? 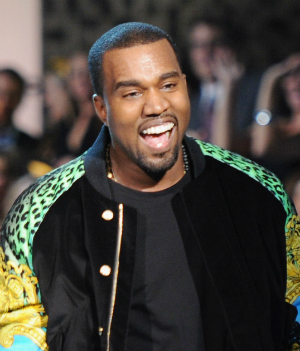 Among the many stream of consciousness topics Kanye West brain-dumped in his epic Twitter session Wednesday night -- his professional frustrations, his fashion aspirations, his new design company aimed at picking up where Steve Jobs left off -- was a brief mention of one curious film project in particular. "I was just discussing becoming the creative director for the Jetson [sic] movie and..." Wait, WHAT? The Jetsons, as in the long-gestating live-action Jetsons movie? And Kanye would have a hand in making this happen? Mr. West, you've got my attention now.

If Kanye's Jetsons project is the one I think he's talking about, it's the live-action reboot that's been kicking around for years, once scripted by Adam Goldberg (Fanboys) with Robert Rodriguez attached to direct. Rodriguez went on to make Spy Kids 4 instead and the project hasn't surfaced much since, so West's Tweet is the first indication in a while that the thing's actually back on track.

Unfortunately, details on what exactly this "creative director" position would be were lost in West's Tweet-crazy haze of thoughts on the creative process and the limits celebrity have imposed on his artistic freedom, or whatever. "Being a celebrity has afforded me many opportunities but has also boxed me in creatively," he wrote, also noting that he hasn't bought new jewelry in two whole years. See? You don't know Yeezy! But anyway, those Jetsons plans:

I was just discussing becoming the creative director for the Jetson movie and someone on the call yelled out.. you should do a Jetsons tour!

This just happened a few hours ago. I was very insulted of course becuase for anyone that's seen the Watch the Throne Tour...

Or Coachella or Glow in the Dark or Runaway.. you know I have real ideas...

Not that West seems to be interested in anything but forward momentum, but a Jetsons movie along the aesthetic lines of his space-toony Takashi Murakami-designed Graduation album would be kind of awesome. In the least, it would make the very idea of a Jetsons reboot vaguely palatable. But while that idea would be cool and all, how can West possibly fit that in with the huge world-changing plans he Tweeted out last night, which include:

· Designing more NIKE sneakers, because only one pair of Kanye West shoes every two years isn't enough
· Starting a new company called DONDA (named after mom) "which will galvanize amazing thinkers and put them in a creative space to bounce there dreams and ideas...to help simplify and aesthetically improve everything we see hear, touch, taste and feel."
· Creating "a new 7 screen experience"
· Making something called "2016 OLYMPIC's ... It's a semi sic-fi since 2016 is only 4 years away"
· Designing the MTV Awards
· Changing the education system to omit higher math courses for kids who'll never need it as adults (That's what I was saying in fifth grade!)
· Starting an alternative summer school with filmmaker Spike Jonze ("Spike Jonze and I want to do a Summer school that tries new forms of cuuriculim")
· (Bonus Movieline suggestion: Grammar lessons)

All of which is nice and all, but back to the important stuff: When are we getting that Jetsons movie??