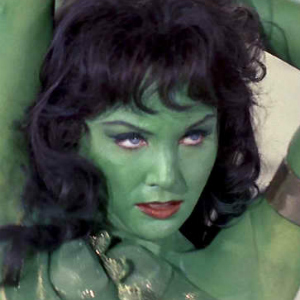 At least, given Hof's dedication to the theme, you'd think that's the direction his spaced-out new venture will go in. (Question: Can sex workers legally sell their wares in costume as copyrighted characterizations, or will they need to pay royalties? Someone get me a hooker lawyer, stat.) Speaking with the Las Vegas Review-Journal, Hof promises that the establishment will feature "girls from another world," and that they will, indeed, be clad in alien-themed costumes.

The goal is to service geeks of all stripes, Hof explained to CBS Las Vegas -- "everyone, all the Star Wars fans and Trekkies." I'm picturing something like the cosplay ball at Comic-Con, only year-round. And more whorish. Hey! Not that there's anything wrong with that...

All I know is, there's been a gaping hole in the Vegas sci-fi community since Star Trek: The Experience closed up shop in 2008. Turn down the lights and pour the Klingon blood wine, nerds. You may have trouble finding a three-breasted woman, but I bet these ladies will at least listen to your fanfic.