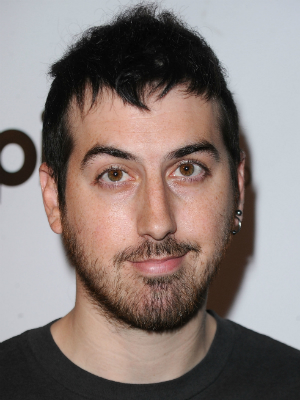 Some of you may be tempted to BitTorrent the latest new releases this week (Were you one of those Fast Five pirates? Admit it, rascal!), but let indie filmmaker Ti West bend your ear with a personal plea as his latest film, the spooky ghost tale The Innkeepers, hits VOD on Friday (December 30). "It's not the money," he writes, admitting that he still hasn't made a dime from his excellent 2009 film House of the Devil. Pay to see indie films like West's, he argues, "because if the movie makes money... that's tangible evidence of a paying audience out there for movies like mine. For independent films. For something different. Not just bland remakes/sequels or live action versions of comic books/cartoons/boardgames." Hear, hear.

West pours a good deal of real talk into his open letter, and not just for potential illegal movie downloaders; he also sheds light on the realities of life as a filmmaker in the arrangement he's struck - retaining creative vision while ceding profits to someone else.

I do not own the films, and by the time any profits would trickle down to little old me (writer/director/editor/producer) they would all have been mysteriously soaked up into vague expenses, random fees and outrageous overages. This is the nature of the business and I have come to accept it. As long as I don't own my films - something I give up in exchange for someone with much deeper pockets affording me the budgets to make them - this is how it goes. It's a trade off and I'm fine with it.

That concession alone is maddening, and yet makes sad, practical sense. House of the Devil was West's biggest film to date and made just $101,215 theatrically via Magnolia upon release. As someone who loved it I'd argue that number was woefully, undeservedly low; it was a film that made me instantly hope to see more from its director, to see where he'd go with a little more money and a bigger profile.  That chance came for me earlier this year when I caught the droll, spooky Innkeepers, and my fellow West watchers will get their chance to see it when it hits VOD this week a month ahead of its February 3 theatrical limited release. But if you need more convincing in favor of supporting films like this, whether you're a potential pirate or an indie film lover on the fence about ticket prices, let's go back to West:

Every time you purchase something you are making a statement. You are creating physical evidence that something has value. If something has a high value, then it becomes in high demand. So if you make a concerted effort to support lesser-known, interesting and esoteric things (Art?) then you are helping make those lesser-known things more popular. I'm sure we can all agree that there are incredible movies made every year that never get the attention they deserve - That's not the movies' fault. That is our collective fault for not being proactive enough to GO OUT OF OUR WAY to support them.

So yes, I want you to go out of your way and pay for my movie. Not because I'm greedy, but because if the movie makes money (whomever for) that's tangible evidence of a paying audience out there for movies like mine. For independent films. For something different. Not just bland remakes/sequels or live action versions of comic books/cartoons/boardgames. This is a powerful time for the consumer. With a small platform release like ours (VOD/Theatrical), it's been made incredibly easy for you to support the film...You don't even have to get out of bed.

Think about what your dollars mean; they tell financiers to to keep funding outside-the-box movies so that you have more options than the latest fivequels/rom-coms/superhero movies/the dreck that folks like Katherine Heigl or Adam Sandler fart out year after year. And lastly:

Where we choose to spend our money should reflect what matters to us and what we want to support. If independent film matters to you, then do me a solid and pay for the film instead of downloading it. It's not a huge financial commitment, but it has a huge financial impact. I am not a corporation, I am not independently wealthy, I don't come from a family of the industry...I'm just a regular dude who made a movie and wants to keep on making them. I can't do that without your help, and it would be very much appreciated.

Put it another way: More House of the Devils/Innkeepers and fewer Jack and Jills or Green Lanterns is a future we would all appreciate and should aspire to.

Make it so, people.