Nick Frost on Tintin, Spielberg Love, The World's End, and Snow White and the Huntsman 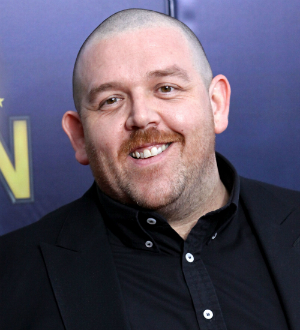 In the decade or so since Nick Frost first made a name for himself on the BBC comedy series Spaced, much has happened. For starters, he's not waiting tables at that Mexican restaurant. He's moved with ease from television to film, most famously in genre riffs Shaun of the Dead and Hot Fuzz (with Spaced comrades Edgar Wright and Simon Pegg), and in the alien geek ode Paul (which he co-wrote and stars in with Pegg). Also notably, Frost has ventured out from the fold in films like Pirate Radio and the forthcoming Snow White and the Huntsman. And, with this week's The Adventures of Tintin, he notches another milestone: Working with his hero, Steven. Steven Spielberg.

Frost, Wright, and Pegg may be stretching their wings a bit after coming to prominence as "The Guys Who Made Spaced/Shaun of the Dead/Hot Fuzz/Etc." but they all come together, with buddy Joe Cornish (whose directing debut, this year's Attack the Block, features Frost as a dope dealer), in Spielberg's motion-capture adventure adaptation Tintin -- Wright and Cornish scripting, with Pegg and Frost as the comically bumbling Scotland Yard detectives Thomson and Thompson.

Movieline spoke with Pegg in New York about his ten years since Spaced, maintaining the Wright-Pegg "unit" while establishing himself as his own entity, his directorial aspirations, working on the upcoming Snow White and the Huntsman, completing the "Blood and Ice Cream" trilogy, how he really feels about Indiana Jones 4, and why he missed his first phone call from Spielberg for a very, very good reason.

You, along with Simon, got to do a riff on Star Wars, he's in Star Trek, and now you're working with Spielberg...

What was the riff on Star Wars -- the College Humor thing we did?

Yes, in which you betrayed a deep, deep knowledge of the Star Wars universe.

I was quite impressed with my sad droid noise. Do you want me to do it for you?

Yeah, it is! It's just one little noise and you think, he's crying! He's sad. That's what that noise says.

So what remains to cross off of your geek bucket list?

I don't know, what have we had -- zombies... have there been any ghosts? Aliens, we've had a space ship. I don't know, I think I'd like to do lots and lots of things but I'm not necessarily going to glue myself to the genre side of it. I think it'd be quite daft to do that. I think it's possible to have your cake and eat it, and we've been very lucky that we have been allowed to do what we want. And now, because of that, we are able to branch out -- Simon doing Mission: Impossible, Edgar doing Scott Pilgrim, and this... We're pretty lucky.

Looking back, it has been about 10 years since the end of Spaced, and the three of you have come so far since then.

Yeah, right? I was just saying, it was like 10 years ago I was serving shitty food to fucking horrible businessmen in a Mexican restaurant...

Yeah, after the first series I went back to work there. That was quite odd. Sometimes people would ask for the bill and then say, "Are you Mike from Spaced?" [Hangs head] "Yes... yes, I am."

Ten years is the kind of milestone that makes you look back and reflect, isn't it?

What would you say you've learned in the last decade?

You know what, I watch a lot. I watch what everyone does, and I'm interested in what everyone does on a set. I didn't train as an actor so I think it would be quite stupid of me to just act, you know? I want to direct a film, films, I want to produce. Me and Simon have always said this is about the long game. This is it now, forever -- this is my job. This is what I love doing. So I think it's silly just to sit around and wait for the phone to ring, for someone to offer you a part. I might as well write it myself and shoot it myself.

And you have all thrived in the arena of creating opportunities for yourself, it seems.

Yeah, but that can be a double-edged sword actually, because people can also look at that and the unit that we are a part of and say, "Well, that's all they do." So people will not offer you things because they think you wouldn't do it because you just hang out in this kind of unit.

You think this happens to you because of the Spaced gang?

You do have this very close partnership, which people know you for, but you must also need to define yourselves separately. And that's what it seems like you, Simon, and Edgar are all doing right now.

Absolutely. And there's no time limit on it. As long as we're happy and working, you can go on forever in this job.

Edgar and Joe [Cornish] wrote this, but how exactly did you and Simon come to be cast in Tintin?

[Smiles] I've been doing that a lot in the past few weeks, just in case people didn't know that I've been working with Steven Spielberg... [Laughs] I think Simon had a meeting with Steven, potentially to see if he would come onboard with Edgar and Joe, after Steven did his draft, to see if maybe he wanted to have a little go at the script. But that just didn't work out, and then I think Steven said to Simon, "Do you want to be in it?" Simon did a little fanboy squeal, and shut his legs as if he was going to do a wee, and then I think Steven said to him, "Well, do you know anyone that you work with, well, that you'd want?" That guy wasn't available, so he came to me. That was that!

No hesitation, I assume, in taking the job?

For me? No! Not at all! Well, his office rang me up one night, one evening. It was like 9 o'clock at night. They said, "Steven's going to ring you in 10 minutes if you could be available," but I was cooking my wife's dinner. She wasn't in, I was cooking her a meal. And it got to a really crucial point in the preparation which meant I could not answer that phone call without ruining my wife's dinner. So I dropped it -- I dropped the call!

[Laughs] It was a really confused message from Steven saying, "Um... hey, Nick. Did my office phone you? Anyway, give me a call back." I phoned the office back and he'd gone to a meeting and I was thinking, "I've really fucked this up." But eventually we got to talk to one another and, you know, we did it. I was so pleased! He's a hero, he's an icon of mine in terms of filmmaking, and a lot of my cinematic touchstones are films that he's made. That said, you can't bring that with you on set. I think me and Simon allowed ourselves like two hours of fanboy dancing, and then...

Then you put on your professional hat.

Yeah, absolutely. That said, sometimes we'd be sitting around the monitor and Steven would be telling a story about how they shot something in Close Encounters and I'd kind of nudge Simon under the table, and we knew that both of us were thinking, "This is fucking amazing"

When I spoke with a few of the Super 8 kids earlier this year they had pretty much the same story.

Oh, cool! I watched that this morning, again. I think it's great, I love it.

It does evoke that magical something in Spielberg's films, doesn't it?

Yeah! Well, you know, we tried to do it on Paul and J.J. did it -- it's just a big, lovely love letter to Steven. I think it says a lot about Steven's legacy to people of J.J.'s and my age and Simon's age that it stayed with us, it affected us through our lives.

As a self-avowed Spielberg fan, let me ask you this: How do you feel about Indiana Jones 4?

[Takes a sip of tea] Well, you know. It's tricky, obviously... but it's still an Indiana Jones film. It's still Harrison Ford as Indiana Jones! I still got that feeling when I heard the music. It's an Indiana Jones film, you know? It's a Steven Spielberg film. [Pauses] Yes, it's different. It's the same kind of things about the original Star Wars films and Phantom Menace. But that said, I am a fan of the originals. Clearly. There are generations of teenagers who prefer the new ones, and that doesn't make them any less valid. They're just different. If I'm trying to be democratic about things... and it's the same with Indiana Jones 4. I liked it. It was weird, and it was different, but it was unmistakably a Steven Spielberg film, and that's fine with me.

You just finished filming another movie. Tell me about your experience on Snow White and the Huntsman -- or, as the fans call it, SWATH.

SWATH! It was great.

Yeah, they shaved me bald every day just to put hair on me, which was weird. It was like, well, I had hair anyway, and you shaved it all off... to then put a wig on.

You're in great company with the other seven dwarfs. What was that cast like?

It was fantastic! I got to hang out with Toby Jones, Eddie Marsan, Johnny Harris, Bob Hoskins, Ray Winstone, for God's sake. I got to just sit around and listen to those guys tell stories.

I like the idea of Kristen Stewart, of all people, sitting in the middle of that group of men -- and also the colliding of worlds, your universe and fan base overlapping with Twilight.

Exactly! I was sitting next to Bob Hoskins and Bella Swan!

Please tell me you and Bob Hoskins and Kristen Stewart talked Twilight on set.

Not really. I think she'd be pretty sick to the bloody back teeth of listening about Twilight. On set she's another actress, and a lot of the time actors just talk about nothing. Talk about shit, they just chew the fat. That's what you do!

And did you sign on for multiple SWATH films as well?

Three, yeah. We'll see where it goes. We were talking about it on set the other day, where it would start and what it would be. We'll have to see how well it does, I guess. But I think we'd all love to do another one. We had a real laugh every day.

Lastly, you've been talking about finishing the trilogy that begun with Shaun of the Dead and continued with Hot Fuzz. What's the latest development -- do you know when you might do it?

We'd rather do it sooner than later. There is a script in place, and it's just a question of finding the time when we can all fit it in, and when it works. But we are all really keen to just crack on. Next year has been bandied around, maybe, but I couldn't tell you.