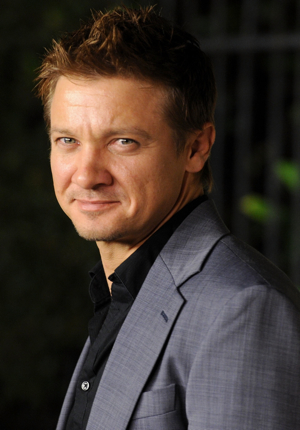 After earning back-to-back Academy Award nominations -- in 2010, for his breakout role in Kathryn Bigelow's The Hurt Locker and in 2011, for his supporting part in Ben Affleck's Boston crime drama The Town -- Jeremy Renner decided to dive headfirst into the action genre with four consecutive big-budget action projects. The first, Mission: Impossible - Ghost Protocol, which co-stars Renner as a mysteriously overqualified IMF agent assisting Tom Cruise's Ethan Hunt on his latest globe-sweeping assignment, premieres this weekend in IMAX. The next three films, Hansel and Gretel: Witch Hunters, The Avengers and The Bourne Legacy, will all hit theaters next year, making the California-raised actor the busiest action star of 2012.

In anticipation of this action upswing, Movieline sat down with Renner at the end of a long Ghost Protocol press day earlier this month to discuss the power of Tom Cruise, the rumor that Renner is being groomed to take over Cruise's Mission: Impossible duties and the surprising intimacy of his next action spy film, The Bourne Legacy.

Hey there. Are those shoes uncomfortable?

But you had to wear them because they match?

You're put together, mama bear.

Thanks. Do you feel cooler now that you've starred in a Mission: Impossible movie?

I don't even feel my legs right now let alone feel cool. [Laughs] I've been running and gunning for awhile.

What was your relationship with the Mission: Impossible movies and television series before you were cast here?

In the far distant periphery, the series was around in my head -- maybe because of the theme song or something but it was much more the Tom Cruise franchise that I was a fan of before I came on.

Had you known Tom before Ghost Protocol?

I think I met him years prior at a table read with other actors or at a party or something. He's always very present and right there with you. You know, he's a movie star, man. He's just a movie star. You can think whatever you want about why he's a movie star but when I got to know him, it became really clear why he has lasted [in Hollywood] and been on top of his game for 30 years.

It's because of his work ethic. Tom Cruise has 48 hours in a day while we have 24. If you want to get something done, ask Tom Cruise. Anything. He is also just very generous with his time. He's just a really wonderful human being. From having been starstruck at the beginning of filming to now, being able to call him a friend -- I just talked to him a few days ago. I was checking in on his movie One Shot and he was checking in to see how Bourne is going and we were getting excited about [Ghost Protocol] opening. It was a wonderful experience to have him be a mentor in some ways and to observe him. All I ask for during a movie is to learn something and boy, do I have a laundry list of lessons I learned from Tom.

What did you learn from him in particular?

He and I have the same work ethic but his just resonates on a higher level because he has done so many action movies and this was just my first one. He set a really high bar for me, which is great, because now the bar is high for the next three action movies that I'll do.

I was willing. I trained so that I was able. Tom really got me on a regimen program so I would not get injured. He gave me an analogy that working on these movies was like working as a professional athlete. I took it a step further thinking that in any professional sport, there is a second string that comes in if you get injured. But in cinema, there isn't a second string Ethan Hunt that rolls in. So we can't get hurt. Most of the training, outside of learning a discipline like wire practice, was not getting injured. Because you're doing things on a wire that your body just isn't used to doing. It's all about preparation. It was never a competition or anything -- he just set a really high bar to live up to and I gave it a go. 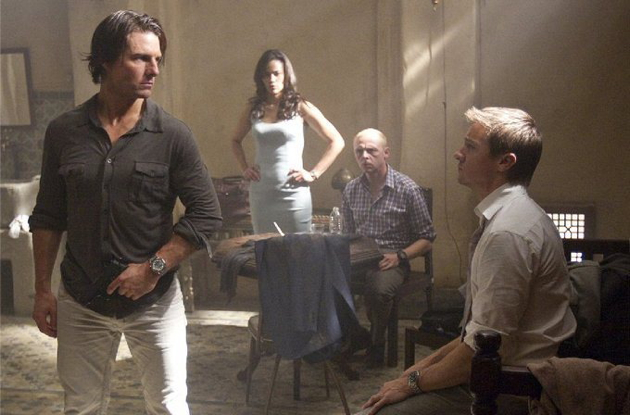 So professional athleticism, avoiding injury -- what else is taught in the Tom Cruise School For Action Stars?

You have to trust the people you're working with. There was a great stunt team on set to help you lower the risks of injury or, uh, death. [Laughs] There is a stunt guy prepping everything, making sure everything is safe for you to try and telling you what to look out for. "When you jump down on this wire, make sure you don't jump too far because you might hit your head on this." So you feel really confident knowing that you have a massive group of guys that do this for a living and you can stay in your character without having to worry about things like that. A lot of the preparation is in the hands of the stunt team. Even with Tom, there were a bunch of guys out there figuring out the tiny details so that Tom could go out there on the Burj Khalifa and do his thing in full confidence because it's been so well thought out.

There were some rumors that you are being groomed to take over the franchise when or if Tom decides to retire. Is there any truth to that?

People keep saying that but there isn't really any truth to it. When it comes to a franchise, there's a truth about wanting to continue it. Did I sign on for more if the movie does well and Paramount gives us the go-ahead and Tom is in, then yeah. It's not cheap to make these movies. People have to want to go see them. But it comes down to, this [franchise] has been Tom's baby since day one and I think it'll continue to be his baby. It's up to Tom to decide the future of the franchise.

I came in so late, and it all happened so fast, darling. I met Tom, I met the director, I go home, Tom calls and asks, "Want to do it?" I say, "Yeah." Then we start doing it and I didn't really have time to prepare outside of what was asked from my physically.

You and Tom do have some great action sequences together. Were you hesitant about any of them?

The only one that affected me outside of the character -- even though it didn't require much of me -- was the one where I'm hanging out of the Burj Khalifa. That wasn't a stunt on my part by any means but hanging out of that building was terrifying. I had just one little wire and a belt around me [to keep from falling]. I kept asking, "You're sure this will hold me, right? Why aren't you paying attention?!" It was pretty intense for about thirty seconds but then I realized that Tom was just hanging out on that wire laughing, telling me to look at the view. 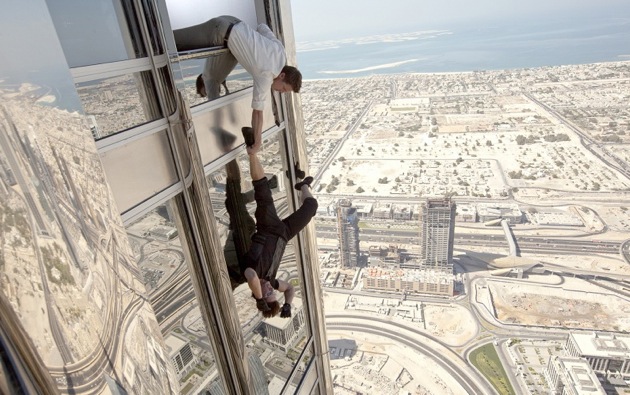 How does being on the set of Mission: Impossible compare to The Bourne Legacy?

They're completely different. There are a few similarities -- they're spies and franchises. They're completely different kinds of cinema. They're shot completely differently, even with the same DP [cinematographer Robert Elswit] and the same action director. But the style and the feel of them -- there's an intimacy to the Bourne franchise that is not in Mission, which is a much bigger, more popcorn tone of the movie. I'm in the middle of shooting Bourne now and it feels like a tiny, little movie -- even knowing that it is a massive movie. It feels intimate. That's the main difference that I feel.

With four back-to-back action films -- Ghost Protocol, Hansel and Gretel: Witch Hunters, The Avengers and The Bourne Legacy -- are you beginning to feel like an action star?

Not really because the next thing I'm going to do after that, certainly is not an action movie. Probably the one after that won't be either. I think that I got a great fix. I got the opportunity to do four action movies in a row, which is awesome. I want to see what else is out there because I have no idea what is. And also, it'd be nice to give my body a break.