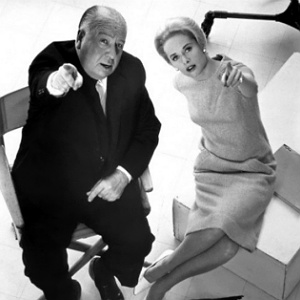 This is far too intriguing not to think about for hours: The BBC2 just announced a project called The Girl, starring Sienna Miller as model-turned-actress Tippi Hedren and Toby Jones as Alfred Hitchcock, who obsessed over Hedren as they filmed the The Birds in northern California's Bodega Bay. The extreme relationship between Hitch and Hedren, which included some violent bird-throwing sessions during one climactic scene, is well-documented and ready for re-inspection (as is any film starring the dashing Rod Taylor). But is this the most fascinating Hitchcock story to examine? We offer one other possible Hitchcock era that might be intriguing to revisit.

But first, good news about The Girl: Looooongtime Hitchcock biographer Donald Spoto is signed on as a consultant, and Tippi Hedren has agreed to do interviews with screenwriter Gwyneth Hughes for the project. It appears this project has the potential to be -- at the very least -- accurate.

And yet, The Birds would've been my second choice for a BBC chronicle. I'm partial to the endless disagreements behind Rebecca, Hitch's 1940 Best Picture winner that marked his debut in America and a stormy partnership with David O. Selznick. Plus, maybe Judith Anderson can linger in the backdrop and cast frightening glances upon everything. Anyway, here's Tippi Hedren's amazing screen test for The Birds. Strut, turn, and pose, Melanie Daniels.

• Sienna Miller Is Tippi Hedren, Toby Jones Is Hitchcock In BBC2 Drama About 'The Birds' [Deadline]