Patton Oswalt on Young Adult, Great Chemistry and the Downside of Nostalgia 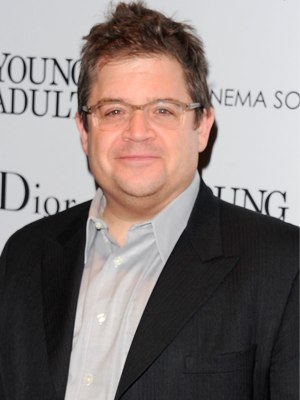 Patton Oswalt is hardly a screen rookie, having starred in various TV series, films, comedy specials; he's not even a stranger to awards season, having voiced the lead in Pixar's Oscar-winning Ratatouille. But there's an unmistakable milestone quality to this week's Young Adult, which places the actor and comic opposite Charlize Theron in a bitter stew of generational angst, woe and futility topped with a hint -- but just barely a hint -- of optimism.

Theron stars as Mavis, a hard-living young-adult novelist who embarks on a quixotic journey to her hometown in the hopes of reigniting her high-school romance with Buddy (Patrick Wilson). Alas, Buddy is married with a new baby -- a minor obstacle to Mavis, despite the urgent counsel of Matt Freehauf (Oswalt), another former schoolmate who has managed graver struggles of his own in the years since graduation. Their unlikely alliance opens Mavis's eyes to a humanity that eludes her, but will it hold enough of an appeal to adapt to as she pushes middle age?

Written by Diablo Cody and directed by her Juno partner in crime Jason Reitman, Young Adult offers a bracing, darkly comic glimpse at the past, present and future of an American generation at odds with itself. Oswalt talked it over recently with Movieline.

First things first: You recently attended the Academy's Governors Awards. How did that go?

That was so much fun. It just shows you what a movie geek I am: The person I was most excited about was Dick Smith, because I owned his movie makeup kit when I was a little kid. I would mix the Flex Flesh and put it in the mold and make the bullet wound and the Quasimodo eye... I had all that stuff. And then I was also so excited because over at the next table... I mean, Gore Verbinski was there, Tom McCarthy -- who I ended up frightening because I kind of got in his face because I love his movies so much. And he was like, "OK! Have fun!" "But in Win Win, the angel falls off the window, I think that's symbolic of the..." And then he said, "OK, I'm gonna go." But two tables over is the actor Ed Lauter. You know?

From The Longest Yard and stuff? I got so... [Pause] I go and I get in Tom McCarthy's face, but I don't have the nerve to go up to Ed Lauter. That's what a movie geek I am. It's pathetic.

So how did you get involved with Young Adult?

I met Jason years ago. I was presenting an award at the ACE editors awards, and I was -- again -- such a movie geek that I recognized all the editors. I actually knew who they were. I'm like the music geek who recognizes the bassists. "Oh, it's that guy." And so I met Jason there, and we both bonded over how much we love movies -- and also the fact that we both own French bulldogs. So we exchanged e-mails. He said, "I do these screenings at my house; you should start coming to those." Those were really great. And then he got this script and he said, "I want to see how this sounds out loud; I heard you do a lot of table reads. Why don't you come over and we can read this?" And we did. We did two or three different reads with two or three different people, and by the time Charlize got there, I just kept doing the reads. "And he was just like, "You know what? You're Matt." And also, when Charlize and I read it, our chemistry just... boom. It really worked.

The thing that struck me was how deceptively physical it is. Of course Matt has a disability, but how did disability -- once who you got into the role -- impact the way you developed this character?

Well, the script itself was so nuanced in terms of dialogue and character. I hired an acting coach and worked with her for three months -- this woman Nancy Banks, who's amazing. I worked with a physical therapist to figure our how my leg didn't work. How would I compensate? How would I work with a crutch? I did that over and over again until it wasn't really on my mind. But then what I realized was... [Stands up] Then, psychologically, what would happen --I'm not sure if you noticed this; I didn't even realize I was doing it -- was that in the scenes where I'm walking along almost too fast? Or faster than I should be going, because I want to keep up with her? [Performs Matt's walk] I had this stoic look on my face, like, "I know what I look like, and I'm not going to acknowledge it, and we're just going to get this done so I can stop." It's saying, "I'm so sick of people pitying me -- 'Oh, look at this poor guy' -- that I'm going to power through and not acknowledge it." But all that was there because of all the work I did with the physical therapist and with Nancy -- working out what this character's bio was, what had happened to him. It was moments like that that I didn't realize would come out, but came out because of all the work that I did.

There's this amazing shot of you when she walks up to the garage, and you're in there with the blow torch and the barrel--

Oh, yeah! That was a cool shot, wasn't it? I didn't know it was going to look that cool.

What did you think when saw it for the first time?

I was just like, "Fuck!" It must have been like when you about actors who see shots of themselves and say, "Oh, I didn't know you were going to make me look that cool." That was great! I got to experience that.

Young Adult is an interesting commentary on nostalgia, as if to say that the generation that came of age in the late '80s/early '90s is either too cynical for nostalgia or just knows it's better to move on. Where do you think the film stands? Where do you stand?

I think they're too cynical to acknowledge nostalgia, but they're just as guilty of it -- if not more -- than generations that came before them. Unlike generations that came before them, because they were constantly recontextualizing and mashing up and being meta and post-ironic and postmodern about the stuff they loved as they were loving it, it truly never did go away.

This movie is very much about Generation X approaching 40 and how they're doing it -- and they're not doing it very well, I don't think. And because we grew up much like the vile bodies of the 1920s, where it all about, "You can act bored, but you'd better never be boring." But there's nothing more boring than approaching your mid-40s. And there's also nothing more pathetic than realizing, "I need some simple comforts right now. I need a song I love. I need a movie I sank myself into. I need an old coat that I liked." There's that kind of double tragedy going on.