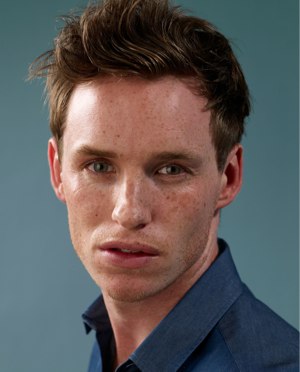 He's won a Tony Award (for Red) and held his own onscreen opposite everyone from Angelina Jolie and Matt Damon (The Good Shepherd) to Julianne Moore (Savage Grace) to Cate Blanchett (Elizabeth: The Golden Age). But there's something about Eddie Redmayne's role in My Week With Marilyn -- as Colin Clark, a glorified film-set gofer mediating the relationship between Marilyn Monroe (Michelle Williams) and her Prince and the Showgirl co-star and director Laurence Olivier (Kenneth Branagh) -- that hints at just the right screen role at just the right time.

Well-seasoned at 29 years of age yet still navigating the indies' treacherous leading-man trenches, Redmayne spoke with Movieline recently about getting to know both Clark and the sexpot whose story he told -- all while plotting that all-important next career step.

Good, man, good. I was doing a play in New York the first time I read the script, and I met Michelle for the first time in New York. So it feels like there's this wonderful symmetry being back here to open it. I love this city.

It's funny, because I was at that first New York Film Festival preview, and while it seemed successful, it seemed like there was some apprehension in everybody's body language -- exposing the movie for the first time. What was your reaction?

There's this great quote from this play I did, Red, about Mark Rothko, the artist. And he talks about putting a play into the world. And John Logan, who wrote Hugo, actually wrote the script; he said that putting a painting into the world is like putting a baby into a room full of razor blades. I think there's always that moment where you've watched anything you've worked on for the first time -- anything you've bled for and cared about -- and of course you car what people think. And it's a terrifying prospect: We knew that was the first audience to have watched it, particularly with the added status that comes when you're representing so man icons, as it were. And I just remember that first moment when that journalist said they had worked with Lee Strasburg and Marilyn Monroe... I mean, I connected it. I know Michelle, of course, representing Marilyn Monroe, was apprehensive. So it was wonderful for her to hear that. We've all seen that and know how extraordinary it was, but I think it was a great validation for her.

What was your experience getting familiar with this material -- the role, with Colin, and just rounding out this character who is obviously based on someone in real life?

The sort of wonderful thing about this sort of scenario is that you have the source material right in front of you. Not only do you have The Prince and the Showgirl and My Week With Marilyn and a huge amount of documented photos of the time; it's lovely to link into that and use those as your resource. But the other thing that happens when you do literary adaptations is that there comes a moment where you have to disassociate yourself from the truth of what's there and start playing the script. You can do all of that ground research, but there's nothing worse than an actor showing their homework onscreen. And so you start playing the piece. But I think Adrian [Hodges, the screenwriter] has done a great job of keeping true to the story. There were two ladies I met -- one was the script supervisor, and another who was sort of a publicist assistant. I went and spoke to them, and they talked about how gregarious Colin was -- how he sort of charmed everyone and had this energy. That was interesting to hear and try to use.

I spoke with Simon recently about that very subject -- having to let the film stand alone from its source material, and also from The Prince and the Showgirl. When you're shooting these scenes right out of the movie -- the movie within a movie -- how do you separate the two and make your performance its own thing?

You were never quite sure when you were in your film's reality or the reality of The Prince and the Showgirl. In the same way, Michelle's dressing room was Marilyn's dressing room, and the Parkside, where she was staying, was Marilyn's [rental]. But I can't help but think that all those things added an authenticity and an excitement to the way that we felt -- to feel that you're treading in the actual paths where these extraordinary figures have lived and performed. It was really riveting.

That's the other thing: You're playing a young man at a turning point in his life and career who runs across the biggest celebrity in the world at that time. How in thrall were you to the myth of Marilyn Monroe as it existed in the personage of Michelle Williams?

I feel like everyone was aware -- for both Kenneth and Michelle -- what an undertaking it was. So as a troupe -- as a company almost -- we were trying to be as supportive as we possibly could. And watching them... I'd get into the makeup trailer in the morning and just sort of comb my hair, and they would gradually, piece by piece, transform over an extended period, whether it was through makeup or wigs or prosthetics or whatever. And then they were into costumes. Watching that transformation happen was enthralling. I suppose the ultimate in acting is playing someone else, but when you're playing someone that is so renowned, it's the ultimate challenge. So as actors, we were trying to everything we could to support that -- much in the way, I suppose, that Colin was doing everything he could to support Marilyn. And it was fascinating to observe, I have to say.

There is also a level of verisimilitude for you as well; you have a similar background to Colin as well, right?

Yeah, we went to the same school [Eton].

Coincidence? Does that inform your character at all?

I hope it's coincidence. I hope I wasn't cast because of that. [Laughs] But yeah. When Colin was taking Marilyn around Eton, and I was taking Michelle around Eton, and all the boys were Eton boys, because they knew I went there, they were all running up and asking what she was like in real life. It extended in many ways -- that meta side to it. And that's what made the filming experience so unique: that element of blurred lines.

I've been watching you for what feels like a long time; I think my first exposure to you was in The Good Shepard. There are good movies in there since then, but I've always wondered when you're going to get just the right role.

When this came to you, did it feel like that right role?

It's really interesting to hear you ask that. [Pauses] On so many levels, acting in film and TV is so much the sum of its parts, and somewhere in there, there's an alchemical thing that makes something happen or not -- that makes something connect or not. Now, of course you want to make work that people see, but the enjoyment I get out of acting is playing characters. So I've done films that very few people have seen, then much more commercial films, then parts of different sizes and accents and heritages. I try to just take it step by step and choose the work dependent on whether or not I feel the challenge in it. When I got this part, I suppose the most interesting thing was that it was the part closest to myself that I'd ever read. And some people say -- my mum, for example -- "Well that actor only ever plays himself." And I say, "You have no idea how hard it is." I've never really done that. So actually, though I would defer to Michelle and Kenneth having their work seriously cut out for them in this, in my own way I had sort of a personal challenge: to try and play someone who's not that far from who you are, really. But it was a challenge in itself.