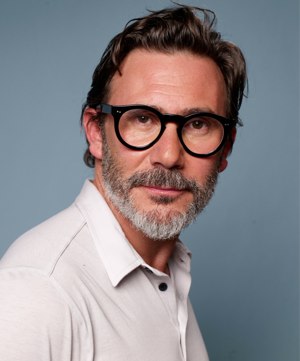 It was probably just a matter of time before French filmmaker Michel Hazanavicius broke through in the United States: His OSS 117 diptych of spy spoofs had already acquired something of an international audience, and his curiosity about Hollywood has grown alongside his reputation. But no one -- least of all Hazanavicius himself -- likely foresaw him breaking through with The Artist.

Which says more about our culture's lack of vision than Hazanavicius's own. After all, he was the one who conceived and executed an honest-to-goodness black-and-white silent film about George Valentin (Jean Dujardin), a silent-era Hollywood superstar relegated to obscurity as talkies -- led notably by George's erstwhile co-star Peppy Miller (Bérénice Bejo) -- surge to the fore. The rest is history -- or it will be history, anyway, if The Artist's devotees continue mobilizing on its behalf in the awards race.

Hazanavicius just made it look easy, though. He recently talked to Movieline about the untold challenges before, during and after making his masterpiece, up to and including what's next for the artist behind The Artist.

How are you holding up in the Artist marathon?

It's not so easy day after day from a personal point of view, because I have kids, and they're in Paris, and I don't see them enough. And a lot of the time you say the same kinds of things, and there's just one subject of discussion -- your own movie. It's not so easy. But in another way, I don't feel I have the right to complain, because it's a good story for the movie. And the movie goes well. So I feel like a soldier serving the movie.

A soldier for The Artist!

So what's the one question you've never been asked about The Artist that maybe you wish you'd been asked?

Well, it's not a question, but I feel like... To me, it's really a director's movie. And I could spend hours talking about how the line of the story is conceived -- which image is important to understand, [or] how to understand at the end why we did that. All the complexity! It's a very complex device, this movie. I know that the people who see it once, first they get the format. It's a really strong experience of the format; they love everything because of the format. But I really don't think they see the movie. I think they really enjoyed the experience of the silent movie. And that's great. But I feel like I could spend more time talking about the complexity -- the directing. It's complex.

How fundamentally different is making a silent film from making a sound film? They're ultimately both visual storytelling, right?

Yeah, but usually you try create some images when you're doing a normal movie, yet you're not attached to that. Sometimes you don't need images. You know that a character can explain something. At one point in the movie, the action stops and people explain what's going on. For example, there's the professor in Back to the Future who says, "OK, this is where we are in the script." You can't have that [in a silent film]; you're attached to images. It's very different to have just that tool. It's very freeing in a way, because I think the audience is really ready to accept some illustration of conflict, of feeling, of something -- a visual illustration that they would not accept in a normal movie.

George is also very proud, both as an actor and a filmmaker -- which interferes with his ability to work and create. Is that an obstacle you've ever battled as a director, on set or otherwise?

I think pride is a motivation... I don't have the good word in English. An engine? A bad engine. Pride makes people move, and usually they make bad moves. In this case, pride moves him to create, but it also moves him to love. But in my case? I guess I'm like everybody. It makes me do some things. I try to fight against it, but, yeah.

To what degree to you relate to George's struggle against pride, if at all?

Not too much, because [the reason] why George doesn't want to do talking movies is about fear. I think he's afraid of doing something else. He's afraid of what might happen to his small enterprise. He's selling himself -- everything works well, and suddenly...

[Hazanvicius's mobile phone alights with a call from Bejo.]

[Answering] Bérénice? [Deploys a French phrase and hangs up.]

So I think he's afraid of changing. I can consider myself maybe proud, but I'm not afraid. Fear is really not something I consider when I'm working. My motivations are more about pleasure and desire. That's what I'm looking for. I don't really care about fear. 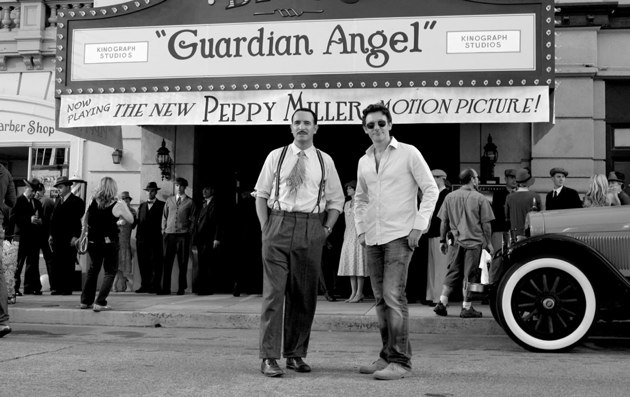 Going back to the complexity of making this film, was there ever a specific scene moment where you thought, "Yes! We've got it!" Or on the contrary -- a crisis of faith on the set, perhaps?

Not on the set. During the writing process, yes. It's the same every time. I don't know anybody strong enough to not doubt. I mean, the only thing is what you do with the doubt. I think doubt can be very constructive, but it can also be destructive. So script after script, I try to use the doubt in a constructive way. For this it was a little different because all the markets say, "It's not a doable movie. You cannot make this movie." So you really feel alone for a long time with that kind of movie. Fortunately I met this wonderful producer, Thomas Langmann, who really has some panache. He's been very supportive, and he gave me his confidence and pushed me in a good way. So I feel so overwhelmed. But when I was writing, this was really new -- to write a silent movie. But I was watching things like City Lights by Charlie Chaplin, and that helped me a lot. When I was watching the movie, I thought, "I have to continue. There is a movie to make here."

How much of the struggle of making this movie is actually getting it to audiences? Is the principle struggle behind you, or is there more to come?

The movie opened in France, and the figures are excellent. We don't count in money, we count in seats. So to give you an example, for my last movies we did 2.3 million for the first one and 2.5 million for the second one. And that is a really big success. For this one I think we're going to do between 1.8 million and 2 million -- which is huge for any kind of movie. Imagine for a black-and-white silent movie! It's just incredible. So I want it behind me, but in a way, everything that comes now is a plus. A plus, a plus, a plus. I have to say, I'm a really lucky guy, because there's a lot of plus. I mean, I never pretended it would be the hugest success of the year. I can't fight with Tintin. I can't fight with some big, popular current comedy or some more easy movies.

But the people who come into theaters, that's the most important thing. When we are talking about the audience, we are talking about two kinds of audiences: The real audience is the person who is in the theater watching the movie. That's the audience. And the other audience are the people in the street who potentially could come. But if they don't, then they are not the audience. They are people. So what's important for me is the audience -- people who are in the theater. And so far, people who see the movie really enjoy it. For me, that's important. I cannot force people to come. I know you have to make an effort to come see a black-and-white, silent, French movie with two unknown actors. I know you have to make an effort. But I can't force people, and I can't blame them if they decide not to come. What's important to me is that people who come to see the movie, they enjoy it.

What's your favorite movie of this year? Or what have you seen that you really love?

There are some. I really loved A Separation -- the Iranian movie? I saw it in Paris. I think it's a Hitchcockian drama, but so special and so accurate. Everything is so fantastic. The actors are fantastic. I was really impressed. I also loved Drive, I loved The Descendants. There are a lot of good movies. This year I didn't have an opportunity to see a lot of them, because...

You've been running around.

At least you're running around at festivals, where conceivably, if you're there long enough, you have a pretty good chance of seeing something good.

I remember when I was at Cannes, I stayed three days, and it was three days of press. And when I was in Telluride, I saw Footnote, which is really good, and Descendants. But for other ones... Like, I had a chance to see Shame, but I'd have to leave the theater 20 minutes before the ending of the movie. So I said, "No way; I can see it later." Toronto's the same way; the schedule doesn't always fit.

Yeah, sure. Festivals are good for that: You see movies, and you meet people, and you meet the other directors. Usually you never meet. When you work, you meet D.P.'s and members of the crew, but they work with me. The director's don't. And I really love directors. I love to talk to them, to discuss.

Having technically worked in Hollywood now, is returning your next step? Working in America, working on studio productions? Or do you want to just keep it small?

I don't have these kinds of geographic goals. I really love to work here, and I really loved to make this movie here, because this movie had to be done here. But I didn't make it to come here and make another movie. It really depends what movie. I have some propositions here; some of them are interesting, some of them are not. It really depends on what movie. I don't have a career plan. It's a lot of investment for me to make a movie -- a lot of time. You immerse yourself in something, and I have to feel more than comfortable. I have to feel like there's a good movie at the end of the process. So it's not the question of being in Hollywood or in France. It's really a question of which movie are we talking about?

The Artist opens today in New York and Los Angeles, with more locations to come in the weeks ahead. Read Stephanie Zacharek's review here.