Zooey Deschanel or Demi Lovato: Which Actress Sang the National Anthem Better at the World Series? 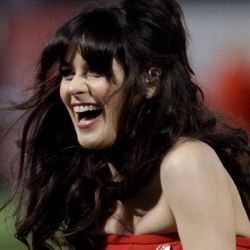 I haven't been watching the World Series because, um, baseball is the least telegenic sport since blogging, but I've caught two actresses unleash very decent renditions of the national anthem since the series began. Two days ago, Zooey Deschanel purred her version, and yesterday, convalescing Disney queen Demi Lovato belted it out. Fantastic. Unfortunately, It is my belief that only one can win. Who did it better?

Sure, we're not dealing with the quality of Marvin Gaye, Whitney Houston, or the Dixie Chicks here, but we've got formidable chanteuses on our hands. First, Ms. Lovato, whose smart blazer and wild Wynonna mane are enough to set off stadium fireworks.

All I can say is that Disney finds talent. That was a strong, assured, and kinda smoky (unless I'm just projecting my Wynonna associations onto this poor girl) rendition. She deserves power anthems in the vein of Kelly Clarkson or Carrie Underwood. The girl is not sub-Miley. She deserves stardom. Now, here is Hello Giggles empress Zooey Deschanel, poised in an expected vintage frock and chirping from beneath that kooky stack of Debra Winger hair.

Interesting to watch "twee" play out in a stadium. She went pretty silent near the end of some of her phrases, and my response to the performance is of a piece with my feelings about Deschanel in general: smart, cute, talented, but not inspired. Demi wins hands down.