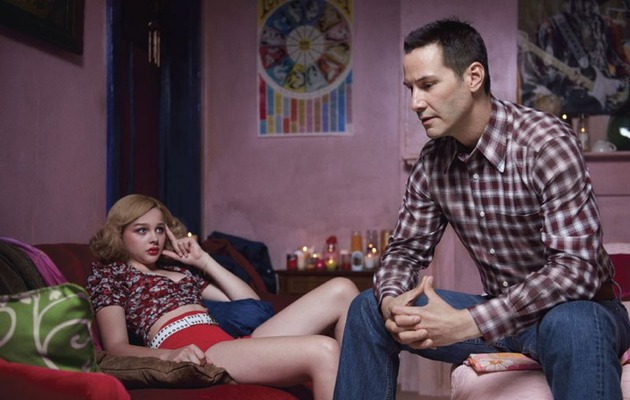 Despite Chloë Moretz's admission that her mother hasn't yet permitted her to watch Martin Scorsese's Taxi Driver, the young actress nevertheless does her best underage hooker impression -- alongside Keanu Reeves as Travis Bickle, no less -- in a star-studded reenactment paying tribute to the great filmmaker.

Harper's Bazaar collected the series of photos, also including Moretz's Hugo co-star Ben Kingsley, Christina Hendricks, Michael Pitt, Kate Bosworth and others from the Scorsese canon and beyond. Meanwhile, Jodie Foster, who memorably played the prostitute Iris in the 1976 classic, recalled with mildly prurient precision the dynamics of Scorsese and Robert De Niro directing her in the film's racier scenes:

When we were shooting Taxi Driver, I think Marty was really uncomfortable with the fact that I was so young. The memory I have is of him and Robert De Niro trying to tell me how to unzip [De Niro's] pants. And Marty keeps bursting out laughing. He can't get a word out, and he tries to act serious, you know? He keeps smoothing down his face on both sides, but he just keeps laughing. And then De Niro decides he's going to take over because he can do it.

On the first day of shooting Boardwalk Empire [Scorsese directed the first episode], I was so nervous. My first day was my big, long speech that I make to the Women's Temperance League. I had a pair of shoes that were custom made, and my feet were killing me! We did the scene once, then Marty wanted me to change the story up a bit so I could surprise them. Kelly Macdonald thought, "Oh, my God, poor Steve. He can't remember his lines." If I see Marty at an event, I'll get a chance to talk to him, but we don't socialize--partly because I'm too shy. He just seems so busy. [Laughs.] He's probably alone by the phone thinking, "Hey, why doesn't anybody call?"

Check out the rest at Harper's Bazaar; it's not a bad way to burn five minutes of your Monday.

[via Thompson on Hollywood]