Joel Schumacher on His Career, His Critics, and Why It's OK to Laugh During Trespass 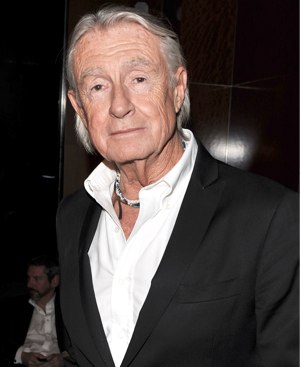 There's no stopping Joel Schumacher, the 72-year-old filmmaker who returns to screens this week with the thriller Trespass. Though to invoke his name in some circles is to invite wishes he would stop; Schumacher has never been an especially popular director among the critical elite, and his latest film, a wild home-invasion potboiler co-starring Nicolas Cage and Nicole Kidman, won't necessarily change things. But you know what? That's a good thing -- at least for Schumacher.

"There are some people who are infuriated with my success," Schumacher recently said in a candid, freewheeling interview with Movieline, covering subjects from his screenplay for The Wiz to how much creative rope to allow intense actors like Trespass's Cage and Ben Mendelsohn. "But the truth is that if I knew I was going to be this successful, then I would have been born more talented for them."

The engaging, self-effacing director had plenty more to discuss about Trespass, haters, revisionism, melodrama, dark humor, and the debacle that was his previous film, Twelve.

Why did you want to make Trespass?

I try to make different movies every time, and not do the same film. A lot of times journalists want to know, is there something that's the same in all my movies? The only thing I can think of is that I do very flawed people -- sometimes people you don't like all the time. Secondly, I put them in a pressure cooker and then see how they're going to turn out. I seem to follow that theme a lot, even if it's more lighthearted. That's the only thing I can figure out from my own movies. And that obviously there are a lot of gorgeous, sexy people in the movies that also act. "Where's the harm?" I say.

What was your vision for it?

Well, just to keep you on the edge of your seat. I also like to do a lot of levels, and some people get the levels. If they just go to the movie and get some entertainment, I'm so thrilled. If it gives them a few chills and thrills, I'm so thrilled. And maybe we have a few plot twists that they would enjoy. And certainly great actors in the film, and an intelligent script. But there are other levels to it. I think we all know that right now in the United States there are too many rich and too many poor and a shrinking middle. I don't know how long it'll be before the have-nots go and grab what the haves have. And then sometimes, as we find out in Trespass, the haves don't have what they think we have. So there are a lot of those themes in it. I think the Ben Mendelsohn character and Nic Cage character -- and both their families, if you will; there are two families on the screen -- are men who overreach for the American dream, one legally and one illegally. And they're both left with the consequences of that.

When the movie begins, we're very much watching what's happened in a lot of families because the father's working all the time to keep up. It's not even keeping up with the Joneses anymore. It's just keeping up with extravagantly rich people. He's working all the time, and the wife feels that the love story that started the marriage doesn't exist anymore. And then there's the teenage daughter. At the beginning of the story, there are three separate people in that house living three separate lives. They're extremely disconnected. And of course when life and death are on the line, everything else changes. All they have is each other. And all three sacrifice so much for each other. At the end of the film, I hope you felt that they're a family. Certainly those three people in life will never be the same.

You'd worked with both Nicolas Cage and Nicole Kidman previously. What made you think they were right for this?

Well, I always want to work with Nicole -- and we've tried many, many times. I think Nicole can do anything. I love to watch her act; I love to watch her. And so I wanted her to play the wife. Especially playing an architect who's [designed] a beautiful house; she would have such great, simple taste that you would believe that from her. I think you'd believe it. And finally it was a chance to work together again. I also know with Nicole, as with Nic, when the camera rolls, they give 200 percent in every take. In a movie like this, every single second the actors are in are crucial to the intensity of the piece -- the reality, the emotion.

I wanted to work with Nic again... I never tried to do a movie with Nicole and Nic before, but I've tried to work with both of them. It just never worked out, even though we had success. It just never jelled. Some projects never come together. And I wanted Nic because he's Nic. And also when the camera rolls, they will both surprise you. Every take is fresh, original, new. It inspires them. They raise the bar very high. And fortunately, I was able to get a cast of people lesser-known who were right up to that bar.

How much rope do you give a guy like Cage or Ben Mendelsohn when you know how intense and over-the-top they can be? How heightened is too heightened?

Ben was Nicole's idea. They were old friends from Australia. I give my actors tons of rope, especially in a piece like this. We rehearse for two weeks, but it's still totally spontaneous when the cameras go. I give them a lot of rope, because why not? My job is to hire the most talented people and just keep reminding them how talented they are. How heightened is too heightened? I think we all love over-the-top. One big director said, "No one ever paid money to see 'under-the-top.'"

I've got to be honest: Parts of this movie were very, very funny to me. I mean, I enjoyed myself quite a bit, but--

But, you know, it's meant to be that way, too. There's so much dark comedy in there. I'm so glad you saw that. In fact, when we showed it in Toronto, I said to everyone before the movie began, "You have permission to laugh!" Especially because there's so much funny shit in there -- as there is in Phone Booth, as there is in Falling Down. There are really sick jokes in 8mm. But I think life's like that! It's hilarious, certain parts of Trespass! I mean, like laugh-out-loud! For me! I think when Dash Mihok's phone rings, and it's the big boss, and he says, "I don't know. How's it going, Elias?" I think it's hilarious!

It kind of marries a few different genres -- obviously it's a thriller, but there are threads of horror, romance, even classic melodrama strung through there. These are recurring elements in many of your films. Did you pick up on them in Trespass's script, or do they more organically occur on the set?

Well, it always was a drama. I'm never quite sure what the difference between melodrama and drama is. I think melodrama is supposed to be bad drama, but I don't think it is. I think it's just drama. I don't know how, if you're in that situation, emotions aren't over the top. I don't know who's just calm and sweet as a viewer through that, especially when you know for all the reasons in the world that Nic can't give them what they want, and how he has to hide that and pretend. I just hope people have some experience watching my films, whatever it is.

Do you think "melodrama" and "camp" are bad words? Or that an otherwise serious film can only be in touch with its camp side at its own risk?

Well, I think you felt those things when you saw this movie. But I've done so many interviews where some people are just scared shitless. I think you're projecting how you saw it, which is fine. That's what they're there for.