Craig Brewer on Remaking Footloose, How It's Like Purple Rain, and Tarzan 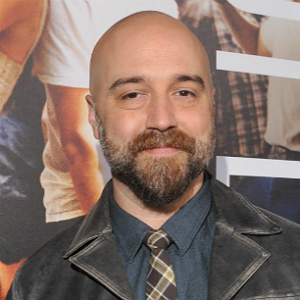 Craig Brewer knows that some of you are skeptical about his remake of Footloose, the 1984 Kevin Bacon teen classic about lusty high-schoolers who kick off their Sunday shoes, strain against their small town conservative parents, and "angry dance" their way to prom. But the director, who helped bring rap music to the Academy's attention in his Oscar-winning Hustle & Flow (and next chained Christina Ricci to a radiator in Black Snake Moan, another tale set in the Southern region where Brewer was raised), comes at it with a fan's devotion and with an awareness of how religion, morality and politics still overlap in the lives of teenagers today. And, as he watched Kevin Bacon do when he was a kid watching Footloose on the big screen, Brewer admits to indulging in his fair share of "angry dancing."

"I angry dance," Brewer told Movieline recently in Los Angeles. "I blare The White Stripes -- usually it's off of Icky Thump, or there may be a couple of AC/DC tracks, maybe some off of Led Zeppelin's Physical Graffiti -- and I move around my office and kind of get that bad juju out of me."

Brewer is such a fan of the original, and pays homage so faithfully to it in his new rendition (which stars newcomers Kenny Wormald in the Kevin Bacon role as Ren McCormack and Julianne Hough, inheriting Lori Singer's role as Ariel, the rebellious preacher's daughter) that some may wonder why Paramount remade it at all. Read on to hear Brewer's reasons for updating Footloose, why he's loved it since age 13, what it has in common with another 1984 rebellious teen pic, Purple Rain, how his upcoming Tarzan project is as much an unexpectedly personal film for him, and the real-life origins of the best line in Hustle & Flow.

I'll start with the big question that I'm sure you've been answering left and right, but still: Why remake Footloose?

Gee, no one's asked me that! That's so refreshing. [Laughs]

I bet! You've only done about 12 hours of press today.

Yeah, but I've also been across the country, and everybody else was asking that question -- but it's a valid question, I understand. I'm not judgmental about it. I'm sure there are plenty of people that think this is a money grab on behalf of the studio. I'm sure people are thinking that I'm just selling out or doing a director for hire gig. I can guarantee you that's actually not the case on either front. There was a moment where Paramount was developing Footloose and it was going to be kind of a more dance celebration -- the same team who had done High School Musical was going to do it. Then they decided they didn't want to do it, and there really was this time when Paramount was going to kill the remake of Footloose. And they called me; I was already down the road with this other movie I thought I was going to do called Mother Trucker, but Adam Goodman, the president of Paramount, kept on me. He was like, "I refuse to accept your pass. You haven't given me a valid reason why you're not making this movie."

So you had to be convinced to do this movie?

I passed on it twice.

What finally made you change your mind?

Adam was right. There hadn't been a movie for teenagers like Footloose in the past couple of decades. I couldn't think of any. I still challenge people to find one; I'm not saying there isn't. But it's not as easy as saying Stomp the Yard or Step Up. What was special in Footloose was not the dancing. Yes, the dancing was fun. But there was something else at work, and I think it had to do with teenagers and parents and educators and administrators and faith and the law, all being these polar opposites of opinion and all being very loud about their opinions -- but no one was really listening to each other. And finally, through these camaraderies of Willard and Ren together, and Ariel and Ren getting to know each other, and the conflict between Ren and her father, suddenly everybody saw that they were kind of after the same thing. They all loved their children. They wanted the best for them, they didn't want any harm to come to them, and it was OK to go to the dance. It was basically a movie that taught me as a teenager that it was OK to stand up for yourself, that it was OK to stand up for yourself in a respectful way. You didn't have to throw a brick. You didn't have to shout with a sign outside of City Hall. You could actually put on a tie and write a speech and maybe get further. And I hadn't seen a movie like that up until I was 13. I was, you know, more of a kid who was into sci-fi movies. But Ren McCormack was this different kind of hero for me, and I can't think of a recent movie that had those kinds of elements to it, that also had daring elements. People forget how hard Footloose was. I've got this fight with Chuck and Ariel, that's right out of the original.

Right. And it goes down in almost exactly the same way.

I don't think I could put that in a teenage movie today if it wasn't already established in Footloose.

Sure. So many of the iconic, memorable scenes from the original Footloose are the kinds of scenes you don't see in youth-oriented films these days. And that fight between Chuck and Ariel, in particular, is still very hard to watch.

It is hard to watch. I think even people who are fans of the original can't believe we went back there. But there are teenagers out there that are dealing with that in their life, there are teenagers out there that have had friends that are dealing with it. So it's not something that's foreign to them, it's just to some extent not the first thing studios are thinking about in terms of entertaining 13-year-olds. Yet in my day, '80s movies that usually get maligned -- they had some punch to them. Purple Rain, that movie came out the same year Footloose did. I love Purple Rain. It's one of my favorite movies. I could teach a class on the first eight minutes of Purple Rain. But that movie had, you know, his father trying to kill himself. He hauls off and smacks Apollonia after she gives him the white guitar. It was complicated, it was complex. It was at times hard to watch.

A woman gets dumped in the garbage, literally.

Right! Right. I mean, it's strange how hard those movies were in places, yet when we look back on them we call them cheesy.

Do you think adults now want to cushion things for younger viewers because they don't think they can take the kinds of scenes? The idea being what we could handle back then, kids today can't.

It's so funny, because I remember I saw Footloose in a theater when I was 13. And I remember, when she says, 'Daddy, I'm not even a virgin,' it got this groan. Like people couldn't believe she said that. Well, the same thing happens when I play it in my remake. And as much as people think that teenagers are hardened, and nothing can shock them, it still shocks them.