Pam Grier on Jackie Brown, Quentin Tarantino, and Her Reign as the Queen of '70s Action Cinema 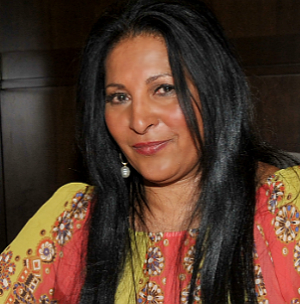 Grindhouse icon Pam Grier blazed a trail through the blaxploitation era, was dubbed "the baddest One-Chick Hit-Squad that ever hit town" (a title that remains uncontested four decades later, one might argue), and commanded the screen with a combination of ferocity, empathy, and a look so striking Roger Ebert once described her as an "actress of beautiful face and astonishing form." Years later, in 1997, Quentin Tarantino paid homage to the work and the woman in Jackie Brown, adapted from Elmore Leonard's Rum Punch, one of the filmmaker's best and most underrated films and the spark that jump-started a career revival for its stars.

Grier earned a Golden Globes nomination for her turn as Jackie Brown, a flight attendant who turns the tables on a local gun-runner (Samuel L. Jackson) and the feds with the help of a sympathetic bail bondsman (Robert Forster, who was Oscar-nominated for the role). In honor of the film's Blu-ray debut this week, Movieline spoke with Grier about the legacy of Jackie Brown, Tarantino's appreciation of a certain kind of woman, her legendary career as the queen of exploitation cinema, and her upcoming turn in rapper-turned-director RZA's martial arts film The Man with the Iron Fists.

How do you feel about Jackie Brown and its impact on your own career when you look back on it now?

Pam Grier: Well, the fact that the film had legs because of the wonderful talent of Quentin Tarantino and his ensemble and the film that he invested two years of his life to write for me -- and for me, I wrote a journal of how wonderful it was to work on the film. My experience was very emotional; I wouldn't reveal it to other people. It's very sentimental, on and off camera. Moments, Quentin's direction, and how he worked with me and other actors, his belief in me... but I really believe that if I hadn't done theater and that process of rehearsal, because when you're on stage people are eating sandwiches, sneezing, there are noises and you can't lose that focus. So that prepared me to work at his level of intensity. Jackie Brown meant a lot. I would always say, 'If I never work again, I have been to the mountaintop.' This was an extraordinary experience with someone who loves films.

And he loves your films in particular, as well. Do you remember the first time you met Quentin?

Grier: Yes, it was frightening! I thought he was a stalker. It was for Pulp Fiction, I'm going in and all my posters are on his wall. I said, 'Did you put this up for me?' He said, 'No, but I would have.' I realized he was a real, true filmmaker. And the nuances of the films that we made, not only with Roger Corman but with AIP [American International Pictures] in the '70s, the women's movement and sexual revolution, political liberation movement, he knew what they meant and what they meant to me. He embraced it, and it wasn't something where he felt challenged, or intimidated. A lot of conservative men were upset that I had taken their roles, or they were objecting to me being so progressive and thought I should be in the kitchen barefoot and pregnant. That was a conservative movement toward the films, where the 'blaxploitation' term was made up to divide and 'let's dismantle this women's [movement].' But they forgot that pioneer women such as my mother and my aunt, who were in Wyoming huntin' and shootin' and fishin' and riding horses and doing things to survive, but not emasculating men or taking away their jobs. Just being the best women that they could be. That frightened a lot of men. But Quentin's generation, the younger generation, were saying 'Yeah, that's what our single moms have to do! They have to do that.' So there was a different mindset. I could see that he was open -- a-ga-pe -- to not only my work, but other work of women. He really likes what women do, and you can really see that in his films after Jackie Brown but he really embraced that character.

Quentin is known for his fondness for grindhouse cinema, including the films you become known for which were termed "exploitation" movies. How do you view that label?

Grier: Well, what is it? Look at martial arts. I saw martial arts films with my ex, Kareem Abdul-Jabbar, he was studying with Bruce Lee and we used to go see martial arts films. And later, The Bride with White Hair and Seven Samurai. Those are exploitation films -- the first two seconds, decapitations, stabbing, children being burnt! But that's action film. Is it exploitation or action? So it evolved into action, because a lot of films are very exploitative today.

When you look at how the female action star has evolved from your time to now, it seems that the sexualized component that largely made it exploitative is no longer on the table anymore. Why do you think that is? Just a product of the time in which these films were made?

Grier: I don't know, you'll have to ask men and ask other women. But I think it's been played out because I established it in the '70s. Forty years later now women are just coming into a story and it's not about sex, it's about survival and being stealth and powerful. Then, we could play at sexuality just to show them we could play at this, it's really silly and it's not that important. But we had to play that out then. A lot of films then would not work today, because it's already been established -- the sexual mores, how people have relationships and open marriages, it's so different today. It's just a different social and cultural difference, sexual difference. It's completely different today. People couldn't even say certain words. You would never hear the word 'vagina' then, even though it's exploitation, it's hard core, it's this and that. Today, you're gonna hear everything. So it's different, but I'm glad I was a part of that. It was tongue in cheek, we were making fun of men making fun of us and saying, back atcha!

"Fearless" and "confident" are adjectives that have been applied to you and your film roles over the years, qualities that really shine through onscreen. What would you attribute that to?

Grier: It comes from my personal life. It comes from me experiencing very tragic circumstances when I was six and again at 19, and again at 21, where I finally felt I had to survive, I had to live through these circumstances. That gave me confidence. I fight a little harder, I challenge people... there are things that happened to me personally that I bring to the screen. But also, I wanted to show other women that they, too, won't lose their femininity or castrate their men by being assertive. It's okay to be confident... if you're right. But it's subjective, like art. Because of what's happened to me personally in my life, I bring that to the screen. Handling guns, if you will, the action, there's not really any hesitation. Just make sure I'm not on fire at the end of the stunt! But there weren't stunt women for me, or at least black stunt women. Only when I did Coffy was that invented. I was a scuba diver, I water skied, and in Sheba, Baby when they had the jet ski, the personal watercraft, Kawasaki wanted to show that -- the first time it was in a movie -- with me in Sheba, Baby. I got on that thing and I didn't even get wet. I came back dry. They said, 'Oh, this is going to be fun.' But they had the confidence, this major brand, to show this in my film. So I felt I was doing something right, for other women. You know, you don't have to be pregnant to have fun, just get out of the house!

Speaking of fun, part of your legend has it that you once punched a journalist in the junk during an interview. True or false?

Grier: Well actually, he wrote that but he exaggerated. I did not. Because if I had really punched him, he wouldn't be walking. He wouldn't be able to finish the article. So he basically made it seem like I was kind of tough, but I didn't really. I wanted a correction but he says, 'No, I want you to look strong!' I said, 'I can do that without this.' But I really didn't punch him in the family jewels. I think he would have sued me if I had! There's one thing I learned in martial arts, we would never joke around with our form, with our art. We're always very respectful. So I would never hurt someone or punch someone outside of a dojo.

I'm curious to hear about your very first screen credit, which was in Beyond the Valley of the Dolls.

Grier: It's Beyond the Valley of the Dolls! I went to the set to visit a friend; I was a starving student working six jobs, and I just kind of went with him and the next thing I know they say, 'Hey, we need more extras!' They said, 'We'll put you in a dress, and you'll say something.' That was my first credit. It was Russ Meyer and Beyond the Valley of the Dolls, and I wasn't even union. I was like, 'Well, okay.' I had no intention of being an actor.

Really? What convinced you to become one?

Grier: I still haven't been convinced. [Pauses] Just kidding! At the time I wanted to be a camera person. I didn't feel like I was attractive enough, with the glamour you see on television and the images that were portrayed. And I was a revolutionary, I was into the Black Panthers, being independent, feeding your own, give them a pole they'll learn how to feed themselves, and all of that. The womanly stuff was foreign to me. I came to Hollywood in a flannel shirt, Timberland boots, and Levis, with a big 'fro in my family's hunting jeep with no roof, no doors, no windows. They'd see me hiking up Sunset Plaza Boulevard, it's a long winding road, because I was used to hiking in Colorado. They said, 'No one in Los Angeles hikes! What are you, nuts?' No, it's just what I do. So I brought all of those differences, a different type of woman. They could dress me up, I clean up well. But that was my first credit. And I didn't know what I was saying. I didn't know anything of what to do.

Are you glad you did it?

Grier: Um... It was tuition money! Anything for school. I was saving every dime.

Grier: Yes! The Man with the Iron Fists, I play his mother. We shot it in Shanghai. He's going to be an extraordinary director as well. He's excellent. And of course I loved Wu-Tang Clan, I loved his art form there, but this is a film where I play his film in the mid-1800s. It was a great experience.