Corey Stoll on Midnight in Paris, Being Ernest Hemingway and the Audition of a Lifetime 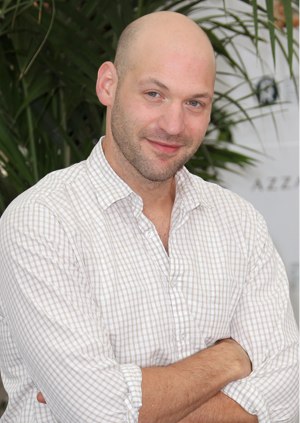 If you haven't yet seen Woody Allen's fantastic Midnight in Paris, do yourself a favor and stop reading this now. (Then do yourself a bigger favor and go check it out.) Arguably the best way to enjoy the film is knowing little to nothing about its protagonist Gil (Owen Wilson) or his late-night exploits around the City of Light, which culminate in encounters with Gil's literary and artistic heroes. Sort of. Corey Stoll knows what I'm talking about.

That's because Stoll has the most memorable of Midnight's many showcases: As Ernest Hemingway, the native New Yorker brings clipped, piercing levity to Gil's disbelieving romp through the Jazz Era and beyond. It's a role as transformative as the film itself, with the 35-year-old actor best known as detective "TJ" Jaruszalski on Law & Order: LA rocking a Hemingway hairpiece and stalking around the salons and saloons of Paris with outsized aplomb. It's a game-changer for Stoll to say the least, bumping the film and TV veteran into a new echelon of not just visibility, but also versatility.

Movieline met up with Stoll recently to talk over the Midnight factor, balancing man versus myth, and why his parents can't stop watching (and re-watching, and re-watching).

Midnight in Paris is pretty much a phenomenon by this point. What's your take on that phenomenon, how it's developed and your place within it?

It's all very surprising. I think from the second I got the role -- or from the second I auditioned for the role -- I though, "This is awesome." But it's weird: It's hard as an actor not to think about what some things will do for your career. Shockingly, it wasn't what I was thinking about at all with this -- this dream chance to play one of the most amazing Americans ever for one of my heroes. For Woody Allen! So I thought, "Yeah, this is just great." But his movies haven't been making huge splashes over the last few years, so I wasn't expecting this to be any sort of a hit. But I also knew it's a Woody Allen movie, so it's going to last. It's going to be part of film history. So all of this -- that it's his biggest hit ever, at least in terms of gross and all that -- it's cool, but I was not expecting it.

So you approached it as a creative opportunity?

Absolutely. I had so much time to prepare, which was so great. Often when you have time to prepare, you don't necessarily know what to do. But it all sort of worked out for me to just read Hemingway and find out about him. I could have prepared for a year or two years. It was limitless.

How did you prepare?

Reading was the bulk of it. I read about him and about the other figure in that circle, but the I was daily listening to the sounds -- the rhythms -- of his writing, the muscularity of that. Actually speaking it aloud often was the most effective and useful thing that I did.

Is there any film or video footage of Hemingway available? I've never thought to look.

I'm not sure. I only listened to one little audio thing, and it was so not the Hemingway you think of when you imagine him. Obviously it is him. It's his real voice, but...

So was your approach to play Hemingway as we've mythologized him versus Hemingway the historical figure?

Well, he mythologized himself. But yes, it's the former. It's not a biopic. Some people have said, "It would be so cool if the whole movie was about him." I'm not sure -- at least the way the scenes I had were written -- if my performance would have been sustainable for a whole movie. I think part of what's successful about it is that you just get a taste of it -- probably similar to Hemingway himself. I think he'd probably be fun to hang out with for a weekend. I don't think you'd want to travel with him to Kilimanjaro. He alienated pretty much everyone he knew in his life.

So I was looking at your résumé going back a few years. Your roles include a detective, agent, sergeant, detective, "Intel type," agent... How do you think the hard-boiled characters you've played inform playing a guy like Hemingway -- even if it's essentially sending them up?

That's interesting. Actually, I was just looking at a clip where I played this hit man -- in Lucky Number Slevin. He was this orthodox Jewish hit man, super deadpan. I was watching it and thinking, "That's sort of what I'm doing with Hemingway." It was kind of shocking to me. But that stillness and directness is one thing that I've been able to capitalize on a bit. It actually comes more from theater: that ability to plant yourself and really be present.

Going further back, what is your background? Where are from, how did you get your start?

I'm from here[New York City]. I was born on the Upper West Side. I went to the High School for Performing Arts here, then went away to liberal arts college and came back. When I was in college, I was doing a lot more experimental, performance-arty sorts of stuff. But I cam back and started working in theater. I went to grad school for theater and was working here for a while, and then I went out to L.A. with a play that had moved out from New York. That's when I started doing film and television. I've come back a few times to do some theater.

But you'd say that your principal interest now is doing film and TV?

I think in the short term, it is. Right now there are opportunities opening for me in a way that they hadn't before in film and television -- especially film. I'd like to concentrate on that. But it's all about the best project to be involved in. Obviously there's some calculus in the career stuff that you have to think about, but it's not necessarily about which medium it is. Film is this sort of rarefied, more difficult thing to get good jobs in, but theater and television can also offer the chance to play great roles and work with great people. I definitely am not cutting myself off from that.