Somewhere toward the end of The Human Centipede II (Full Sequence), Tom Six's follow-up to the notorious 2010 dare of a horror film The Human Centipede (First Sequence) -- after the sequel's new villain had performed makeshift "surgery" on his twelve victims but before the film's gruesome, stomach-churning denouement -- the woman sitting next to me fell ill and fainted. She came to minutes later, she told me as we waited for medics, only to be greeted by a wall of disorienting, horrifying sounds, a cacophony of screams and even worse noises, accompanied by some of the vilest images ever captured on film. Needless to say, it was agony to live through. But, she said with a brave smile, it reminded her that she was human after all.

Fantastic Fest founder Tim League, introducing the film's North American premiere Thursday on the opening night of the annual genre festival, joked that EMTs were on hand should anyone feel sick. "You might have noticed there's an ambulance out front, so if anybody does feel faint or passes out or has cardiac arrest, we are ready," he announced. Apparently festival folks didn't think that would really happen; by the time my seatmate was filling up her second complimentary Human Centipede II barf bag, said ambulance had disappeared and we had to call a second to the theater. Thank goodness for practical swag?

Getting so sick you miss the worst of the film and reclaim your sense of human decency may not exactly be Dutch filmmaker Six's intention, but if you're going to subject yourself to The Human Centipede II -- a far more extreme endurance test than the first -- a renewed sense of one's humanity is at least the best possible byproduct that can come from watching it. It's not really a film one can or should enjoy, which is what Six seems to be telling his own audience, the fans who giggled through The Human Centipede and demanded more! Gorier! More extreme! Well, those people will get what they asked for.

By its very nature the sequel builds its own legend, and anyone walking into the Alamo Drafthouse last night was openly accepting its challenge. Especially since Six brought with him his director's cut of the film, the version deemed so graphic and disturbing it was banned in the U.K. and which North American distributor IFC Films plans to re-edit for domestic release. When I asked Six about IFC's edit and why the distributor felt a need to cut the film, he demurred, after praising American audiences for being "the most enthusiastic" about the first film. "Of course, I'd like it the most if people played my version. But it's out of my hands, I can't do anything about it. I believe IFC knows exactly what they're going to do with it, but there's definitely going to be a director's cut." 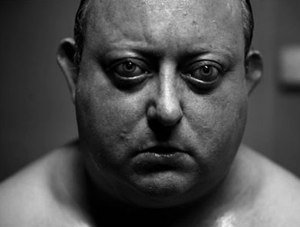 Laurence R. Harvey stars as Martin, a short, overweight, emotionally disturbed middle-aged Brit who lives with his abusive and loathsome mother in a cramped flat and works as a security guard in a sparsely populated underground parking garage. His true, and only, passion in life? Tom Six's The Human Centipede, which exists in the film as it does in real life: A perverse shock movie that became a cult hit around the world thanks to a sense of depravity that can only -- hopefully -- exist in fantasy. Here, however, with Six (the real-life director) manipulating reality with a narcissistic self-reflexivity, the very nature of fan worship and celebrity becomes the basis of new horrors.

When he's not spying on the moneyed strangers who come through his parking garage, Martin is obsessively watching and re-watching The Human Centipede and salivating over its images of mutilation, humiliation and torture. (He also phones the real actors of the first film to lure them to London under false pretenses, posing as a famous genre director's casting agent.) Attempting to find more meaning in the depravity, Six hamfistedly draws connections to Martin's obsession with his first film -- and its villain, Dr. Heiter, whom Martin sees as a role model and, perhaps, an ideal paternal figure -- and Martin's own lifelong victimization. Aural flashbacks to sexual abuse at the hands of his own father, the cruelty of his hateful mother, the derision of normal folks who see and treat him like a freak all hammer this home all too obviously, nearly matched by Six's attempts at commentary on other perceived social ailments: The ease with which anyone can procure weapons, the breakdown of the family unit, the mistreatment of the mentally-disabled, the poisonous cycle of sexual and physical abuse. You want to tell Six that yes, we get it already. But then subtlety isn't exactly his thing.

Six almost succeeds in creating sympathy for Martin, a product of his society whose suffering explains the atrocities he eventually commits in the name of claiming some measure of power for himself. In his own twisted, cognitively-limited way, Martin has his own moral limits; he'll shoot, maim, mutilate and kill with no qualms, but he makes a point to leave a crying baby alone even as he adds its parents to the pile of hogtied, injured victims imprisoned in his warehouse lair. When some of them die from their wounds, or from choking on their own vomit, Martin sobs over the loss -- but only because it keeps him one step away from realizing his master plan.

But then Six's own desire to shock mucks it all up. Right around the time Martin, mimicking Dr. Heiter's surgical procedures as best he can (i.e. not well at all), begins prepping for surgery by tossing household items, kitchen utensils and the contains of a toolbox into a suitcase, it becomes clear that things will get a lot messier than they did in Heiter's pristine home laboratory; "100 percent medically accurate" this is not. Once Martin rolls up his sleeves (and takes off his pants) to get to work, hammer and staple gun in hand, the film takes a nosedive into its ugliest, most revolting depths.

This is about when the woman next to me checked out against her own will; her mind and body simply said, "Enough." The last scene she remembered seeing was one of the film's most difficult to watch, and one of the scenes that got Six's director's cut banned. Prior to the film, I asked Six, who cited Pasolini's notorious Salo as "the best film of all time," if he enjoyed seeing people react violently to his films. "That's filmmaking, right?" he answered, cheerfully. "I'd rather have people hate the film or love it than be in the middle and think, eh, it's okay."

Well, what if it turns someone's own body against them -- is that a measure of success? To some degree, yes; it's designed to turn the tables on its own gore-hungry fans by depicting a fictionalized version of one of their own so revolting they think twice about their twisted tendencies. But it's so indulgently perverse, and so viscerally disturbing to watch -- not to mention a painfully vain exercise in self-worship -- that the lesson is incredibly hard-won. Take a word of warning, if you're on the fence; you don't have to see The Human Centipede II to know you don't want to see it.