Breakfast at Tiffany's at 50: We Need to Talk About Mr. Yunioshi 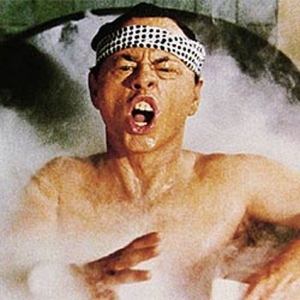 As delightful as it is to watch Audrey Hepburn flitting about New York in Breakfast at Tiffany's, gazing adoringly at jewels and pretty things and falling in love as party girl Holly Golightly -- the original Carrie Bradshaw -- a shadow has loomed over that film for decades: Namely, Mickey Rooney's cartoonish turn as Mr. Yunioshi, the buck-toothed, bespectacled and slightly pervy Japanese man who lives upstairs. The good news, circa 2011, is that after years of not knowing exactly how to address that ugly, embarrassing moment in classic Hollywood cinema -- hindsight and all that -- Paramount Pictures, releasing the 50th Anniversary Blu-ray this week, offers a concerted effort to make amends.

It may seem like a small part of the slick and comprehensive new Blu-ray release of Blake Edwards' 1961 classic, which comes packed with loads of commemorative special features celebrating Hepburn and the beloved film, but the 17-minute documentaryMr. Yunioshi: An Asian Perspective, released previously on the film's 2009 DVD re-issue, is the single most important. Honestly, you can forget the daydream loveliness of "Moon River" and the escapist fabulousness of Holly Golightly's very existence. No part of the film speaks louder about American life at the time (and what fantasies real Americans received at the movies) than Mr. Yunioshi.

As played by Rooney, Mr. Yunioshi is shocking to behold. To say the character and performance don't hold up today is an understatement; at the time the caricature may have been accepted and written off as merely colorful comedic slapstick, but many decades of social progression later, it's clearly downright racist. "Miss Go-right-ry!" Rooney calls to Hepburn, affecting an outlandishly extreme "Asian" accent. With his gnarly prosthetic teeth, slicked back hair, Coke-bottle glasses and squinty eyes, he's an uncanny personification of WWII-era anti-Japanese propaganda cartoons. He's skeevy to boot; the film mines laughs out of his features, accent and behavior, not to mention Holly's efforts to shrug off Yunioshi's efforts to get her upstairs into his apartment for a private photography session. It may have been just another blip in a long history of movies featuring insulting ethnic stereotypes, but in the middle of an otherwise lovely film it became one of the more cutting examples of institutionalized racism in Hollywood.

"It just made me cringe," says actress Marilyn Tokuda, one of a handful of film and media pros interviewed in the documentary. You don't have to be Asian or Asian-American to feel that cringe when watching Rooney in the film, or to notice the striking lack of Asians in mainstream media, let alone movies. But it's not solely a matter of being woefully mis- or under-represented. Phil Lee and Guy Aoki of the Media Action Network for Asian Americans, who also appear in the feature, patiently and painstakingly explain what "yellowface" is for those who don't know, detailing how characters like Mr. Yunioshi (or Ming the Merciless, Mr. Moto, Lon Chaney in Shadows, or even Nancy Kwan in The World of Suzie Wong) reflect and perpetuate negative stereotypes that can seep off-screen into the public consciousness. When American audiences of the 1930s, 1940s and beyond are only exposed to evil Asian villains who are untrustworthy, for example, can you draw a correlation to the U.S. government then justifying the internment of Japanese-Americans on the basis that they can't be trusted?

That's not to say that racism in movies causes racist behavior. The former perpetuates the latter, and for better and for worse Breakfast at Tiffany's is a product of its time. Did filmmakers back then intend to offend? Probably not. Is their ignorance excusable nonetheless? I'd say no. We've made strides as a people, an industry and an audience to avoid lapses in judgment this damning, and we've seen the likes of Justin Lin, Jon M. Chu and Maggie Q proliferate in front of and behind the camera in recent years, helping to reverse the historic trend by normalizing the Asian-American presence in Hollywood with mainstream successes. Still, minority voices are in relatively short supply. So it's worth remembering, as we soak in the blithe cheeriness of Holly Golightly and celebrate the 50th anniversary of her romantic escapades, exactly why her Japanese neighbor upstairs is so worthy of (not so) polite disdain.