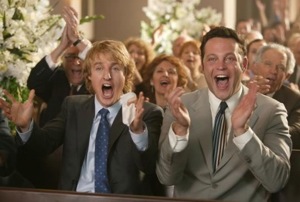 Let this be a lesson to all Wedding Crashers fans: Just because Owen Wilson and Vince Vaughn pull some hilarious pranks without legal consequence in their 2005 comedy does not mean that said hilarious pranks can be pulled without consequence in real life. Just ask 22-year-old University of Wisconsin student Luciana Reichel who has been jailed for 90 days and put on 30 months probation after playing a copycat Wedding Crashers practical joke on her roommate.

It wasn't until November, when Charapata overheard another student telling people about Reichel's eye drop stunt, that she realized what had happened and went to the police.

Upon her arrest, Reichel confessed to the crime and explained that she was inspired by the Wedding Crashers scene in which Owen Wilson adds Visine to Bradley Cooper's drink so that he can spend more alone time with Cooper's onscreen love interest, Rachel McAdams.

To determine Reichel's sentence, Winnebago County Judge Barbara Key also took into consideration the student's "lengthy history of lying and manipulation, in addition to her alcohol issues." Police have stated that it is unlikely that Reichel, who was hoping to pursue a career in nursing, would be hired in the health care field.

(Rule #98: Don't intentionally cause bodily harm to your roommate when pursuing a nursing career.)

David Dobkin's Wedding Crashers, which was written by Steve Faber and Bob Fisher, has not inspired any other college crimes.