When Steve McQueen's Hunger debuted at Cannes in 2008, Michael Fassbender -- playing Irish hunger-strike activist Bobby Sands -- was a revelation. Now he's ubiquitous, potentially to the point of overexposure, appearing in comic-book blockbusters (X-Men: First Class) and tony literary adaptations (Jane Eyre) alike. Yet each performance, and each project, is so different from the last that it's still a joy to watch him. He has one of the gifts that great actors need, the ability to be focused and unselfconscious at the same time. He knows when to surrender and when to call every muscle and brain cell to attention. I fear someday he'll win an Oscar and risk losing it all.

But for now, at least, he's safe from that; he still belongs more to the world of performance than to the self-aware world of stardom. McQueen's Shame is one of two films here featuring Fassbender (the first was David Cronenberg's A Dangerous Method) and while he's terrific in both, Shame asks more of him, and he meets the story's demands with grace, agility and a discipline that you might call steely, if it weren't so supple.

Fassbender plays Brandon, a successful New York professional who suffers from sexual compulsive behavior. You might call him a sex addict if that term didn't conjure visions of David Duchovny and Charlie Sheen acting out like spoiled schoolyard kids, and what Brandon suffers is more peculiar and more painful. He has assignations with hookers; he initiates potential encounters with luscious strangers he sees on the subway; at work, he leaves his desk for the men's room, where he relieves his urges with joyless efficiency. His boss, David (James Badge Dale), is also something of a buddy -- the two troll city bars together, looking to pick up women, though the prattling David strikes out more often than he scores, while Brandon barely needs to arch an eyebrow. Even as David tries to glom onto Brandon's subterranean attractiveness, he also seems to be finding subtle ways to register his disgust with Brandon's beyond-healthy sex drive: Early in the movie, Brandon finds that his computer has been whisked away temporarily by the company's tech department. He knows -- and we know -- why.

When a small blond pixie of a woman shows up in Brandon's apartment, you assume it's one of his former conquests. It turns out to be his sister, Sissy (Carey Mulligan), who's landed in New York for a few gigs, and for whatever reason, Brandon is none too pleased to see her. She's a jazz singer, and her performance of "New York, New York" in a club one evening -- it's mournful and expectant rather than jubilant, as far away from Frank Sinatra's version as Times Square is from the moon -- affects Brandon in a way that we can't immediately comprehend, though it clearly opens a gate into the persistent, repetitive pain he's feeling.

The bare story of Shame, when you lay it out, doesn't seem like much. But the actors bring everything to it; their suffering is both magnetic and painful to watch, almost as if it were a variation -- or an aberration -- of basic sexual attraction. Mulligan, with her bleached-blond crop of hair, resembles one of the cool-customer chanteuses of the '50s, like Helen Merrill but with a cherub's face. She's terrific here, and restrained in a way that suggests an actorly generosity unusual for someone so young: Her scenes with Fassbender don't so much say "Look at me" as "Look at him."

Although of course, it would be impossible not to. Fassbender is outrageously handsome in the conventional sense, but in this role, there's also something guarded and reticent about his expressions. He resembles the young Christopher Plummer -- his smile is gaunt and a little forced, like a death's-head grin. There's some sex in Shame, but there's only one scene that qualifies as truly sexy (his partner here is Nicole Beharie, who must share the credit), and it's so erotic, so frank without being explicit, that its culmination is devastating. I hesitate to give away anything more, but I wonder who will find this scene more upsetting, men or women? My heart sank when I saw where it was going, and I thought it was just me, but the woman next to me also gasped.

Shame is, like Hunger, beautifully made, and similarly, it's about a man at war with his own body. And again Fassbender -- here playing a character whose capacity for tenderness is in danger of being erased by his self-hatred -- shows us something new in his face, whose basic features have by now become pretty familiar. He's the kind of actor who leaves you thinking about what you've just seen and wondering what he'll do next. His face is the opposite of overexposed: It's an unwritten future. 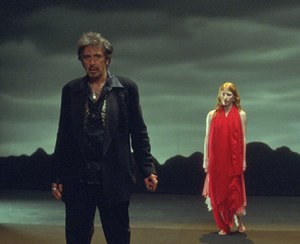 Al Pacino: What a nutter! Not only did he insist on staging a controversial version of Oscar Wilde's Salome in Los Angeles in 2006; he also decided to make a movie version of the play simultaneously, to be shot in only five days; and -- get this -- he figured he may as well make a documentary about the whole process while he was at it. That documentary is Wilde Salome, screening out of competition here at the festival (where Pacino will also receive the Jaeger-Le Coultre Glory to the Filmmaker award), and it's a mess. But Pacino himself knew it would be: Early in the film, he prattles on about his ambitions and his intentions, wrapping up by saying, "It's going to look a lot like I don't know what I'm doing. Because I don't."

And Wilde Salome is an enjoyable mess, particularly for anyone who gets a thrill out of documentaries about process. At the beginning, and even somewhere in the middle, you can't believe that any of this -- the play, the movie, the documentary -- could possibly come together. But eventually, it does, and during the course of it, the young star of the production, Jessica Chastain (seen recently in The Tree of Life and The Help) transforms before our eyes from a stiff ingenue to a force to be reckoned with. Pacino, for one, can't believe what he sees. In this production, he himself plays Herod, lascivious stepfather to Chastain's comely Salome, and his line readings come straight out the goombah school of acting: "Why did she not return to the banquet as I commanded huh?" he asks at one point, his eyes bulging with froglike intensity. Only Pacino could get away with that kind of absurd line delivery, and actually, not even he can. But Wilde Salome is still great fun to watch. "I play Herod because crazy emperors work for me," Pacino says. As always, the world is his.