Postcard from Venice: Soderbergh's Contagion — Catch the Fever! But Try Chicken with Plums at Your Own Risk

After the freshness and deceptive simplicity of their debut, the 2007 animated feature Persepolis, Marjane Satrapi and Vincent Paronnaud's Poulet aux Prunes -- or Chicken with Plums -- showing in competition here, is something of a disappointment. The cast isn't the problem: The movie stars Mathieu Amalric as an embittered musician living in late-1950s Tehran, and Maria de Medeiros as his beleaguered but adoring wife; Chiara Mastroianni has a tiny part, and the fine Moroccan-born actor Jamel Debbouze appears in small dual roles.

But the material just doesn't resonate, as Persepolis did. Persepolis was based on Satrapi's marvelous graphic memoir of growing up in Iran at the time of the Islamic Revolution, a straightforward, bracing and funny piece of work that lent itself beautifully to the elegance of black-and-white animation. Chicken with Plums is a live-action film (based on another of Satrapi's graphic novels from 2004), and Satrapi and Paronnaud aren't as surefooted with this medium. But more significantly, neither the story nor the characters give us enough to hold onto. They're storybook figures rather than people we can really come to care about, and in some cases, their behavior is so bad that it's hard to feel much sympathy for them at all.

Amalric plays Nasser-Ali, a formerly great violinist who no longer has the will to play, partly because he can't find the right instrument. But the greater issue, we learn, is that years ago he lost the love of his life, a woman named, quite symbolically, Irâne. Now he's married to Medeiros's Faranguisse, who has borne him two children and who cares for him deeply. But after suffering years of verbal abuse and neglect, even she has reached the end of her rope. Chicken with Plums takes place in the eight days before Nasser-Ali's death, and tells the story of his rather miserable life.

Some of his suffering you can buy -- this is Mathieu Amalric we're talking about, an actor who, particularly in the movies made by Arnaud Desplechin, has shown a knack for playing flawed, troubled, jittery characters that are nevertheless easy to connect with. But Nassir-Ali comes off mostly as a spoiled, bitter complainer -- and, as his wife reminds him, he does moon around the house all day while she has to go out to work and take care of the family. Lost love or no, Nassir-Ali has simply never made a go at life.

What's more, the filmmaking here is stylized and aggressively whimsical, reminiscent of the filmmaking of Jean-Pierre Jeunet (director of the wonderful A Very Long Engagement and the far less wonderful Amelie). There's some too-cute magic realism going on here, as when Nassir-Ali dreams of Sophia Loren and we see a giant pair of brassiere-clad breasts moving toward him, just inviting him to bury his face in there. There's a faint air of melancholy hovering over Chicken with Plums, and while that aura shouldn't be heavier, it could be better defined. The metaphor embedded in the story -- the idea of one's home country as a lost lady love -- is a basic and potentially potent one. Does it really need to be cutesified? 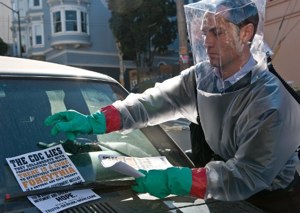 Stephen Soderbergh's epidemic thriller Contagion, showing out of competition here at the festival, is a forthright, effective piece of filmmaking, even if it's front-loaded so that most of its power (and its horror) is clustered in the first third. I won't go into too much detail here, as my colleague Alison Wilmore will be here with a full review when the movie opens next week. But I will say that I was surprised by how eerily suspenseful the picture is, beginning with its image of a sniffly, sickly-looking Gwyneth Paltrow, en route to her home in Minneapolis after a business trip to Hong Kong -- she looks like she's got something that she won't be able to kick with a few doses of DayQuil, and boy, does that turn out to be the case.

Soderbergh has assembled a cast of biggies here, including Marion Cotillard, Kate Winslet, Jude Law and Matt Damon (who has a moment early in the picture that's off the charts, an expression of grief so elemental that it nearly derails the movie). But Soderbergh also does well by some other terrific actors who haven't had any major roles of late, including Jennifer Ehle as a take-charge researcher and Elliott Gould in a small but heroic turn. Gould got the biggest laugh I've heard at the festival this year, when he shoos away a semi-crackpot blogger played by Law: "Blogging isn't writing," he says. "It's graffiti with punctuation." That line was tailor-made for an audience of old-school professional journalists and critics -- many of whom, out of necessity, blog for their outlets as well. We're wrestling with our own epidemic, but at least we can laugh about it.