How Did Marty and Doc Brown First Meet? 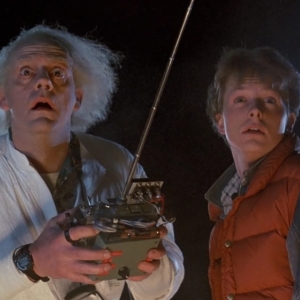 Over at Mental Floss, a question was posed yesterday that's plagued fans of the Back to the Future films for years: "Is it ever explained why Marty hangs out with Doc Brown?" Before long, an official-ish answer surfaced, courtesy of BTTF co-writer Bob Gale. The answer won't shatter your world, but at least it puts those suggestions of inappropriate older man-teenage boy relations to bed.

I suppose any nutty BTTF fan could have logged into the thread as "Bob Gale" and posted their wackadoo theories as to the origins of Marty and Doc Brown's friendship, but the answer might then have been way more insane than this reasonable-sounding response:

"Okay, from the horse's mouth (yes, I'm the horse -- er, co-writer, co-creator): We never explained it in the movie. But the history of the characters that Bob Zemeckis and I created is this...

For years, Marty was told that Doc Brown was dangerous, a crackpot, a lunatic. So, being a red-blooded American teenage boy, age 13 or 14, he decided to find out just why this guy was so dangerous. Marty snuck into Doc's lab, and was fascinated by all the cool stuff that was there. when Doc found him there, he was delighted to find that Marty thought he was cool and accepted him for what he was. Both of them were the black sheep in their respective environments. Doc gave Marty a part-time job to help with experiments, tend to the lab, tend to the dog, etc.

And that's the origin of their relationship.

Sounds peachy by me, but if you'd like to read the more esoteric guesses posted to the original question, head here. And of course, sound off below and tell us if you buy the totally wholesome story of a red-blooded American teenager becoming fascinated with the dangerous older man down the block.