Likes: Hanson, Being Lazy -- Is This Your Twilight Saga: Breaking Dawn Pirate?

Today, after four months of investigation, Summit Entertainment released a press release identifying the young woman who allegedly stole photos and video of Bill Condon's unfinished Twilight Saga: Breaking Dawn back in March and leaked the images and screen grabs on the Internet. The investigation spanned four continents and the studio has filed civil action in two countries and criminal action in one. But enough with the boring legal details! After the jump, Movieline conducts its own Facebook research on the woman who allegedly released those Bella/Edward sex pics.

After reading Summit's press release -- which named Daiana Santia of Argentina as one of a group of suspects "that stole photos, unfinished images and video of Breaking Dawn" -- Movieline did some basic Facebook recon and pulled up the limited public profile for a Daiana Santia, also from Argentina. Facebook Daiana Santia listed her college as Universidad Nacional de Misiones, which is located two hours outside of Posadas, the actual suspect's Argentinian hometown where Summit has taken legal action.

After reaching out to Santia via Facebook for comment, her profile was made private within 20 minutes. Fortunately, Movieline captured screen grabs (above and below) just in time. 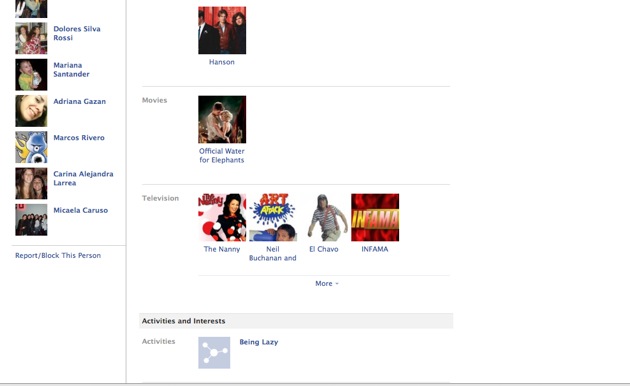 Facebook Daiana Santia lists Water for Elephants (Robert Pattinson connection!) as her favorite movie, Christina Aguilera and Hanson as her favorite music and "being lazy" as her favorite activity. A Flixster account opened under the same name lists Santia as 24 years old.

Responding to Movieline's request for comment, representatives for Summit Entertainment would neither confirm nor deny Santia's Facebook identity.