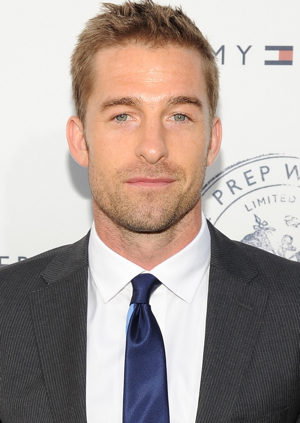 Of all the characters who share the same Montreal apartment building in Jacob Tierney's dark crime comedy Good Neighbors, Scott Speedman plays the absolute worst. His Spencer is an acrimonious widower/invalid who toys with his neighbors (played by Emily Hampshire and Jay Baruchel) for sport while hiding a twisted nocturnal alter ego as a serial killer terrorizes the nearby area. If you need evidence that Speedman -- still best known for his work on Felicity and the Underworld series -- has graduated from playing the sensitive, brooding, NYU student type, you'll certainly find it here.

Movieline met up with the Canadian actor in West Hollywood earlier this week to discuss, among other pressing subjects, his role in Good Neighbors, his enthusiasm for seeing others suffer and his warm memories of Felicity.

At what point did you find out that Jacob was writing this part with you in mind?

I wasn't sure of the timeline, but earlier today Jacob said that he told me very early in the process. I had wanted to do a movie with him before and when I read this script, I was pretty much on board right away.

Is it flattering or vaguely offensive when someone writes such a twisted role with you in mind?

Flattering in kind of a way, sure. I think he had seen something in me that he wanted to bring out, which was nice because no one has ever written anything for me before.

How do you relate to your character Spencer?

His picking at people, his impoliteness, his sarcasm, how much glee and fun he takes in the suffering of others.

In what ways do you take glee in the suffering of others?

I think that it's always fun, especially in a group dynamic with three or more people. It's fun to have a secret little thing about somebody else in a petty kind of fun way. If someone else was here, I'd do that to you. [Laughs] Just kidding. But there are certain things [Jacob] knew about me that he thought would serve this movie and character well.

Good Neighbors was shot in Montreal with a Canadian director and cast. What do you like about working on a Canadian film set as opposed to one in the U.S.?

Well, it's such a funny, touchy subject to go into. I mean, I don't know. The difference is minute and it's not. If you're on an independent movie in Portland, I'm sure it's very similar in a certain way to doing an independent movie in Montreal. Obviously there are differences and you add in Montreal which is its own, completely different kind of culture. It's a very specific kind of place. It has its own politics, its own social structure. It's just different.

The Canadian government recently rewarded David Cronenberg for shooting the majority of his films up north as opposed to James Cameron, who abandoned the area for Hollywood. Do you feel a sense of loyalty to the Canadian film community that influences your selection of projects?

Maybe not as much as others. I won't do a movie just because it's Canadian. It is important though. If a project is something I don't want to do, it being a Canadian production isn't going to push it over the edge for me. But at the same time, I do find a lot of interesting work up there. I don't want to make movies about hockey and curling. That's boring to me. But I do find these darker, more interesting stories that are offered to me, more often, up there, than they are down here.

You recently worked with another Canadian director Mary Harron on The Moth Diaries. Were you excited to jump into the vampire genre?

No, you know, not at all. It's not like a vampire movie. It's a Mary Harron movie so it's smart, it's sophisticated, it's interesting. It's more about girls in private school than it is about vampires. It is just an unfortunate time for that word "vampire" to be thrown around.

Do you think The Moth Diaries could change all of the tween Twilight connotations that the word "vampire" has now?

No, there's obviously a ton of movies with that subject and pop culture is just immersed in that right now. I will say that we made it at a time when [vampires] were just being introduced into pop culture but now they are at a maximum level right now.

What kind of character do you play?

A teacher of poetry to these girls and my character sort of has this odd relationship with one of his students.

When Movieline spoke to you two years ago, you mentioned that you were still turning down a number of roles because you had a hard time warming up to the idea of all of the promotional obligations that would be required of you. Has that changed?

Yeah. That must have been a long time ago. You get certain moments in this business and if you're not willing to do all of that stuff it becomes harder to do the kind of work you want to do. That's the nature of the beast. I don't think it's ever going to be me going on the Tonight Show doing cartwheels but I am very passionate about telling stories and telling stories with directors -- a lot of people are directors but there are very few I want to work with, who can tell stories visually and have a real grasp of what that means.

Which directors in particular?

You know, I'm sure if I asked you it'd be the same list as mine. There are a lot of them. I just want to get to the point where I'm working with them.

You crossed J.J. Abrams off of that list a decade ago for your role in Felicity. What's your relationship with Ben Covington like these days?

Very good. It's still one of the warmest things that I've done. It was such a great time in my life. Maybe I was in denial but I never thought that was something that held me back. In my mind, it was the exact opposite. I don't think I'd be here talking to you if it wasn't for that. I don't know. I love that show and those people.

Do you still keep in touch with J.J.?

Yeah, we run into each other at certain things here and there. There's always this sense of camaraderie because that was his first TV show. It's so cool to see everything he's done since.