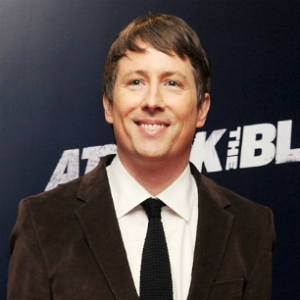 When the British sci-fi action pic Attack the Block opens this week in limited release, courtesy of Screen Gems, it will mark the completion of the long journey that comedian, screenwriter (Ant-Man, The Adventures of Tintin: Secret of the Unicorn), and first-time director Joe Cornish has made with his alien invasion passion project. So how did a South London-set hood actioner fronted by a cast of teenage unknowns manage to become one of the buzziest, fan-beloved films of the year?

It all began with Cornish's goal to find a debut project that had the perfect combination of elements: An action film with a social conscience, old school special effects, a cross-generational sound (created by Basement Jaxx and composer Steve Price, like "John Williams and John Carpenter get together and get very high," according to Cornish), an unconventional story, and even more unconventional heroes. The resulting film is a rousing, pulsing horror-comedy blast that features familiar folks like Cornish buddy Nick Frost, but is ultimately carried away by its cast of youngsters, led by the stoic, startlingly John Boyega. (Look for Movieline's profile of up-and-comer Boyega on Monday.)

Boyega is Moses, the teen leader of a gang of young thugs that decide impulsively to fight back against a barrage of furry, vicious alien creatures that bombard the streets of South London one night. Unlike most of its contemporary genre brethren -- including, perhaps, the big budget Cowboys & Aliens, which opens against Attack the Block this weekend -- the film flies in the face of the usual sci-fi movie choices, from the alien themselves to their reason for visiting, and what's more, it's grounded in real-life socio-economics ("A little fiber with your fruit," says Cornish). And yet, it calls to mind the great classic crowd-pleasers of the '70s and '80s, from Gremlins to E.T. to Close Encounters of the Third Kind, with no small dash of Goonies-esque energy.

Movieline caught up briefly with Cornish over the weekend at Comic-Con, where Attack the Block shared a panel with Screen Gems property Underworld 4 after winning the Audience Award at the L.A. Film Fest last month, to discuss his long journey bringing the film to an audience, what sets it apart from other CG-heavy alien spectacles these days, which Tintin stories he'd like to tell if he continues writing the franchise, and how he felt when Tintin director Steven Spielberg saw (and loved) his film.

By now you've spent so much time with Attack the Block, opening it in the U.K. and building this successful grassroots fan following stateside. You sold it after SXSW, won the L.A. Film Fest award, and took it to Comic-Con. How do you feel now that you're nearing the end of this journey?

Just amazingly proud, very lucky, and appreciative that people understand what we're trying to do with it. And that they enjoy it. I've wanted to make a film since I was a kid. I waited a long time. I waited for the right idea, and I really put my heart and soul in it, so I couldn't be happier. But most of all, I'm so proud of the 11 young people in the movie. We had 11 kids, from aged between 10 and 17 when we shot and for the vast majority of them it was their first on-camera work. And every time I go to a city and see their faces onscreen, I just kind of feel amazingly proud. I wish I could bring them all with me. I wish I had all of them here on tour with me.

It's been great to have John Boyega touring stateside -- he's the heart of the film, isn't he?

Yeah, he's amazing. You know, I always hoped that I would be able to give those kids a good start, and you never know with a movie whether you'll do them justice, whether they'll be proud. So I'm really excited that it's worked well for them, and I hope that they go on to have really great futures.

Ten years from now, they'll probably feel like they were one of the kids in Goonies. Attack the Block has engendered that kind of a following, it very much fits that bill.

[Laughs] Absolutely. As long as they stay away from Corey Feldman's behavior in his late 20s.

That's good advice. Now, one of the many elements that distinguishes Attack the Block from so many other contemporary science fiction films is the use of practical effects, even with your aliens. Why did you opt away from CG?

When I wrote it, when I was looking for investment, everyone said to me, 'This is a great idea -- but we can't do this without a CGI budget.' They said, 'How can you possibly do this for anything less than, you know, $20 or $30 million?' But I always had an idea of how to do it, and the idea was always inspired by the movies that I loved that had practical effects work in them. I grew up with that stuff and I loved it.

What is it about CG that turns you off?

I feel that however good CGI is, the physics of it doesn't really fit with live-action. And I've always thought that puppetry and costume work is better, because of the physics thing with human beings. So I kind of had this idea to use a rotoscope technique, a technique where you almost animate on top of the frame, and I came up with this idea of the creatures having fur that absorbs light, that creates a two-dimensional shape. And yeah, I absolutely wanted to connect that to practical effects work, to find a way to do that stuff that would still be accepted by a contemporary audience. For me, CGI creatures are quite same-y. It feels like the monsters, the dragons from Harry Potter could just stroll into Battle: LA and no one would tell the difference. But hopefully, my creatures in Attack the Block are unique, and they're ours and ours alone and they look unlike anything from any other movie.

Considering your feelings on CGI, I'm curious about your thoughts on the other film at Comic-Con that you're associated with, The Adventures of Tintin, and how different that looks from other CG films. What are your thoughts on how the look of Tintin translated to screen?

You know what, I haven't seen it yet! I've seen about 15-20 minutes of it. I finished my writing work on it before I started Attack the Block, then I just devoted myself completely to my movie, so I'm as excited as you to see it. But weirdly, when Herge wrote that stuff, he worked from photographs. The only stuff in Tintin that isn't taken from photographs is the faces, so really it's actually a pretty good fit for this technique.

Did you hear about the surprise announcement that Peter Jackson would direct a Tintin sequel, if there is one?

Would you be onboard to write future sequels?

Well, I think that would be up to those guys. I think that we would be honored to be asked. You know, I would clean their bathroom if they wanted me to.

Which other Tintin adventures would you like to explore?

Well, I'm a big fan of all of them. I'm a big fan of the ones where they go to the moon, I'm a big fan of The Castafiore Emerald, I'm a big fan of Cigars of the Pharaoh... The Black Island... I love them all. It's hard to choose. I think the thing about Tintin is I'm merely a humble writer, a small fraction of a big process with many amazing, talented minds. I'm just a first-time filmmaker who those guys had faith in, so I would be happy to work on any of them.

Have you shown Attack the Block to Steven Spielberg yet?

He's seen it, yeah! And he told me that he loved it.

Well, it kind of happened mysteriously. I was talking to him with Edgar on a conference call and he said, 'Oh, I've seen your movie and I really loved it.' We had a lot of stuff to talk about, so I didn't question him any further, just in case he had reservations. [Laughs] I just took that. I'm happy with that.

Attack the Block is in limited release this Friday. Read Movieline's review here.