Rose McGowan on Red Sonja, Barbarella, and How Conan the Barbarian Saved Her from Retirement 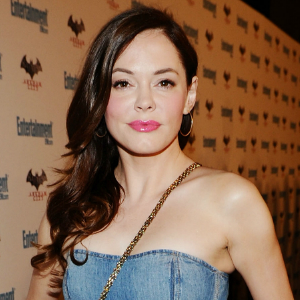 Meeting Rose McGowan over the weekend at Comic-Con, she instinctively offered her left hand first. Having injured her other arm weeks ago in the goriest window-related accident I've ever heard, she'd flown into San Diego to promote this summer's Conan the Barbarian, touted as one of the bloodiest action pics of the year. But to hear her tell it, Conan the Barbarian's got nothing on McGowan's last few years when it comes to struggle and pain -- and yet, she credits the summer swords 'n' sorcery pic with changing her mind about quitting Hollywood.

McGowan points to a number of events that brought her to the brink of retirement a few years ago: "Mean directors," major injuries, family illness. She was to star in updates of Red Sonja and Barbarella, both with former partner Robert Rodriguez, before the pair split and both projects fell apart, one by her choice, the other not. After two years "out of the game," she took the role of Marique, a half-witch, half-human villainess with a freaky look and an even freakier psyche, in Marcus Nispel's Conan the Barbarian -- and the hard-R fantasy actioner re-ignited something within.

Movieline spoke with McGowan in San Diego about the injuries that led to her pulling out of Red Sonja, the reason why Rodriguez's Barbarella remake stalled, how playing the witch with seductive claws and serious daddy issues in Conan revived her passion for acting, and why she might yet move to a farm in Italy in the near future.

[McGowan offers her left hand, pointing to her still-injured right forearm] I went through a window.

Yeah. The window was mean. I was like, 'I am not having the meanness, window.' No, I had just moved, and they'd painted the trim around the window.

And you punched through the glass...

No! I slid off, I was pushing with all my weight on the handle and slid off and plowed through the window. Hit an artery, sprayed everywhere. This cut twice to the bone. The only time I freaked out, because I have really little wrists, is when there was this huge hole and I stuck my finger in it, because there was blood spraying, and it went all the way to the first knuckle.

That's when I panicked. And the amount of blood, my assistant said, was like in a movie. It was just spreading like a lake. And the arterial spray -- it was all over the walls. It looked like somebody got murdered in there. [Pause] It was perfect for Conan! I was like, 'Oh! They should have used some of this.'

It must be especially surreal for you to see that sort of scene in real life as opposed to the movies, or on a movie set.

To see it in real life, you almost get outside of your own body. I remember thinking, 'Next time I'm going to have to have them make the blood a little bit darker, because this is what it looks like in real life.' You have more of a reference point. [Points out scar] It looks like I took a hole puncher and tried to kill myself.

How long ago did this happen?

Three weeks. I heal really fast, and it's still healing. I'm doing a movie in Vancouver, I just flew down at four in the morning for Comic-Con and they took the stitches out five days early. Which sucked. All of a sudden it catches on fire, like it's burning up.

On that note, that's an incredibly appropriate segue into talking about Conan the Barbarian, which is being presented as a very bloody movie.

It's a hard R! I will say, that's why it's called Conan the Barbarian. Somebody was asking, 'Marcus Nispel, he's done horror films -- is this like horror?' No, it's barbaric. It's exactly what it says it is.

I spoke with Jason Momoa about his take on Conan. It seemed a bit surprising to fans when he was cast, because he's got a different look than the movie Conan we've seen before.

Well he does, but he also looks like the Robert E. Howard imaginings. He's beautiful, he's got gorgeous green eyes. He looks like a damn barbarian -- in our dreams, what a barbarian would look like. He also has a scene where he has no clothes on his bottom. I was like, 'Hey, now, I'm bringing all my gay friends!' [Laughs]

You play a half-witch, the daughter of Stephen Lang. What was the appeal of the character for you?

Well, they wrote it for a man.

Really? It was originally supposed to be Stephen Lang's son?

Son, yes, who would try to curry favor on the battlefield and this and that. They changed it up, so Stephen Lang is obsessed with raising his dead wife, my mother. She is a sorceress. And I am very jealous of my dead mother. Basically, I'm trying to seduce my father, so I have a bit of an Elektra complex, and at the same time go out and do his battling as much as I can for him, to please him -- because I'm in love with him, basically. I like that it has this level of pathos to it, it's not just this bad guy character who wants all the power because he wants all the power, which we've all seen many times.

Had the role been rewritten for a woman before you came to the project?

No! It was still Farique, not Marique. It was funny, imagining it. I was like, 'That scene would have been kind of gay, if it was...' There's nothing wrong with that, in fact I was actually thinking that would have been kind of great if it had these really great homosexual undertones to some scenes. But they changed up the script, they changed it to a girl and that changed everything. But I like playing strong women.

It's been fun to see you in character so far, because Marique looks just... insane.

Insane. I don't know how to describe her -- she looks insane!

Was that sort of look always intended for her?

I was aware of the renderings, and they had such an amazing team to do it. The hair and makeup team was just top notch, couldn't have been better. It was an honor to work with them. I think she's very majestic and queenly, and I think she's eerily beautiful. And when I say that I'm not discussing myself, but the character, in a very bizarre way.