Bill Condon Talks Breaking Dawn Secrecy and Honeymoon: What Will He Keep From Fans? 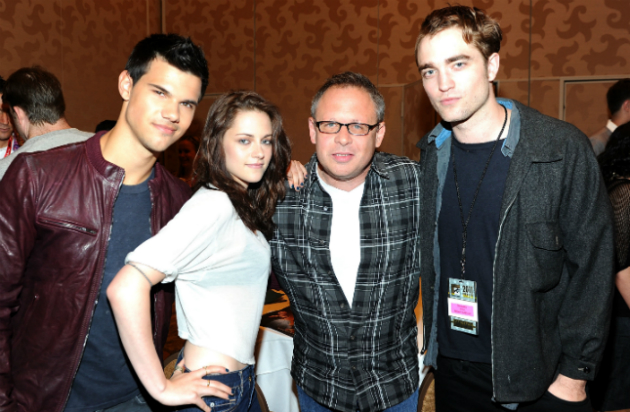 Movieline caught up with The Twilight Saga: Breaking Dawn director Bill Condon in San Diego, where he made his first Comic-Con appearance, joining stars including Kristen Stewart, Robert Pattinson, and Taylor Lautner in debuting two revealing clips from the November release. But what parts of The Twilight Saga: Breaking Dawn (The wedding! The honeymoon! Imprinting!) will Condon fight to keep secret until the film lands in theaters?

Read on to find out as Movieline discusses all things Breaking Dawn with Condon -- Jacob Black's infamous imprinting scene, his Kristen Stewart crush, plans to visually represent the book's big showdown scene, potential Twilight spin-offs, the wedding dress, the film's rating, and whether or not fans need to see "full-on sex" in Breaking Dawn Pt. 1.

[See photos of the Twilight stars at Comic-Con]

I've seen every Twilight panel at Comic-Con over the years, and Kristen and Rob and Taylor really seemed more comfortable this time around.

What were your feelings coming to Comic-Con this year? Every Twilight director has made an appeal to fans when they come aboard the franchise, whether through open letters or otherwise, and Comic-Con is a huge opportunity to actually engage with the fans to reassure them.

Exactly. That's what's been the best part of it, I have to say. Part of it is like a junket day, but the other part is showing footage to all the fans in one place. And that's like having the best test screening you've ever imagined, really getting to expose it while we're still working on it! Getting to expose it to a crowd like that was really fun.

What current work are you doing on Breaking Dawn?

Finishing up the cut now. I'd say another two, three weeks. And we start scoring and mixing in September.

And the effects work?

God, no. Even the moon and all that stuff [seen in the Comic-Con clips] was temporary.

When you were first announced to direct Breaking Dawn, you seemed a bit of an unusual choice.

Yes, sure -- I hadn't done action before.

Not only that, but the idea that Bill Condon would want to direct a Twilight movie! What were the reasons you were interested in the job, and how did you go about convincing Summit you were the right director?

You'd have to talk with them but I think it was the connection to the material that I felt. Because it's all told from Bella's point of view, I don't know why I hook into her so much especially in this story. And my Kristen Stewart crush, you know? The idea that she was going to take this journey, I was really exciting to collaborate with her on that.

Before you got the Twilight gig, there were a few other directors' names being bandied about.

I have to say, I've since then read about Gus Van Sant [having been considered to direct Breaking Dawn]. I would love to see that movie.

Are you glad to have gotten to adapt Breaking Dawn as opposed to the other installments in the saga?

Yes, definitely. I feel like I cheated, you know?

You skipped to the end!

Right, totally! Because the other movies are so... very different. But I also know that when you write a script, the second act is always the tough one because it's where you've got to keep interest alive while not giving anything away and setting it up.

Breaking Dawn is also particularly challenging because, at least when I read it, I thought certain things and events might be unfilmable -- the invisible powers colliding in the ether and, well, imprinting. How did you figure out how to approach those elements cinematically?

I think with imprinting it's, more than anything, because the book does go into Jacob's point of view...

[An engine revving on the street below interrupts]

Is that Kellan? [Laughs] But imprinting -- I think it had to be told visually from Jacob's point of view, but Jacob as magic creature. That's the thing, that's what it represents. It's his magical wolf part that's being expressed there, it's not the guy who goes to high school and is on the reservation. Once you key into what the essential thing is, it helps to visualize it.