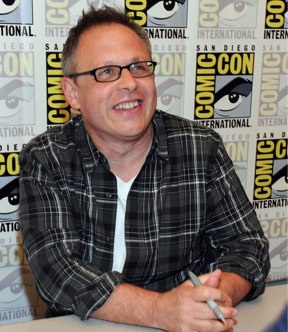 Yesterday in San Diego, The Twilight Saga: Breaking Dawn director Bill Condon mysteriously hinted that Stephenie Meyer could have more Twilight spin-offs left in her. Movieline caught up with Condon for a chat overlooking the Convention Center (full interview to come) and asked him to clarify: Is Stephenie Meyer planning to write more Twilight stories?

"No, that's just speculation," Condon explained. "But when I've asked her, 'Is it over?', she's been very definitive that [Twilight] is the Bella-Edward thing. She's sure of that; telling the Bella-Edward story is over for her."

However, Condon's not ruling out the possibility that more Twilight could be written, especially considering that Meyer contined her four-novel Twilight saga with the 2010 novella The Short Second Life of Bree Tanner, which explored further the previously unseen experiences of a newborn vampire supporting character featured in her third book, Eclipse.

"That leaves you with the question," Condon mused. "God knows, in Breaking Dawn alone, the numbers of characters she introduced... She could go in a lot of different directions."

Stay tuned for more from Movieline's chat with Bill Condon and follow our Comic-Con coverage all weekend!