Patricia Clarkson Sounds Off on Ageist, Sexist Lingo: 'I Love Animals, But I Hate Cougars' 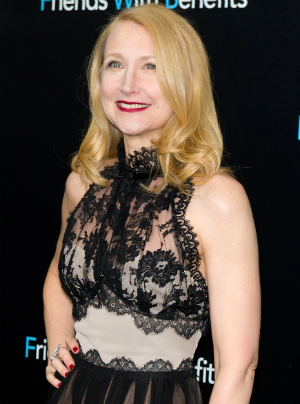 Patricia Clarkson is hot, and proud of it -- just don't call her a cougar. The veteran actress addressed the plight of the older woman (and older actress in Hollywood) while playfully discussing her latest film, Friends with Benefits, in which she co-stars as Mila Kunis's free-spirited, sexually aggressive mother.

For Clarkson, the comic offers have only recently begun to come in; she points to Woody Allen's Whatever Works as a turning point for her, going from a primarily dramatic actor to one known to nimbly mix humorous roles into her repertoire. "Now I'm being offered a lot of comedic parts, which is great because I'll always be offered dramas," she explained. "You know, somebody ill, somebody dying --- they're coming to me first." (She next appears onscreen in One Day as Jim Sturgess's mother -- who is, of course, suffering from cancer.)

"As we get older in this industry -- and look, I'm very lucky, I'm still very much working in movies at 51 -- comedic parts are very few and far between," Clarkson continued. "I think they think women aren't funny as they get older, when we're much funnier! We have a lot more to laugh about."

As for the idea of a no strings attached sort of relationship, Clarkson opts for tradition. "I don't think I could do friends with benefits," she laughed. "I have my friends, and I don't want to be naked with them. I don't want to see them naked. Do they look like Justin Timberlake and Mila Kunis? No... I like the separation of church and state."

Friends with Benefits is in theaters this week.