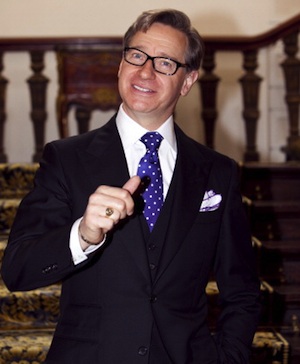 If the total grosses of The Hangover Part II, Pirates of the Caribbean: On Stranger Tides and Transformers: Dark of the Moon have you feeling a bit peaked, there is some hope: the success of Bridesmaids. The beloved Kristen Wiig-led comedy not only scored near-universal praise from critics upon its release in May, but record crowds as well; it's the biggest Judd Apatow production ever, and over the Fourth of July, Bridesmaids became the highest grossing R-rated female comedy of all-time. Said director Paul Feig to Movieline about topping Sex and the City for that crown: "I'm dancing in the streets about that one."

As he should be. The Bridesmaids director rang up Movieline from London on Friday afternoon where he's busy writing what he called "Dumb Jock," the romantic comedy that could star Jon Hamm and Melissa McCarthy. "I'm very excited about that project," he said. "I'm writing with them in mind, and it's just a love story that I've always wanted to write, that I think will be really funny, but will play much more real than most quote-unquote romantic comedies. Fingers crossed, I get them to do it."

Feig took some time away from that highly anticipated project to discuss the success of Bridesmaids, how Hollywood will react to its record-breaking box office, and just what he'd be looking for from Bridesmaids 2.

So, what are you doing to celebrate becoming the biggest Judd Apatow production ever at the box office?

I'm still kinda buried at work right now, but I'm just really, really happy. It's kinda what I secretly hoped would happen. The funny thing was, pretty much from the moment we wrapped and started editing, Judd would always -- joking, but serious -- refer to this as his most successful film. It was really exciting that it actually turned out to be that.

Were you expecting Bridesmaids to connect with audiences the way it has?

I was feeling good about it, and, I think it was the moment we did the first real test screening of the two-hour-twenty-minute version in Woodland Hills -- it was still pretty rough, and it just went through the roof. I think it was that moment when I definitely knew we had something that could take off, but then you just never know if people are going to show up. My last movie was not as good as this, but Unaccompanied Minors scored in the high 90s when we'd test it, so you could also look at that and go, "Well, it's going to be a huge hit!" But then it all depends on how it gets marketed, and if it gets people interested. The hard thing is getting people to come to the theater to see something, no matter if it's good or not. Sometimes we have to worry, "Well, we have it, let's just hope people show up." Universal did a great job marketing it and getting it out there.

They did. Plus, Bridesmaids became the rallying point for the "women can be funny!" movement. Now that it's a success, how do you think Hollywood studios will react?

Well, I'm thrilled because this is what I'd really hope would happen, and what I had a lot of angst about all through the project. Like, "Oh, God, if I screw this up and it doesn't do well, it will probably be used as a referendum against doing a movie like this." So, I'm thrilled, and I hope a lot more get made. My only fear is that the takeaway from this for other people isn't, "They did it gross and dirty, so let's be ten times as gross and ten times as dirty and we'll have ten times as big of a hit." The takeaway needs to be -- because of Kristen Wiig and Annie Mumolo's great script -- the story. It's a very engaging real story that we fought very hard in the rewriting process to make sure tracked emotional; that we were telling a very real story in the heart of a sometimes very big comedy. So, what I don't want is a bunch of other women's movies get greenlit, and they don't get done correctly, and then people go, "Bridesmaids was just a fluke!" and they go back to not making movies with women. I really want this to be the seed that sprouts into a very lucrative and successful female-movie market. There should never be again where comedy is looked at like, "Oh, you can't do that because that skews toward women." I hope the outcome of this is for people to make the funniest, most emotionally moving comedies they can, and it doesn't matter if men or women are starring in it. And there'll be no more filter of like, "But it can't be women!"

This all goes back to when Judd and I did Freaks and Geeks. We've always been very much in sync about stories have to be very real, very emotional and then you build the comedy up from there. You build it on the character and out of behavior, and you don't build it on set pieces and the crazy jokes, and then go, "Oh, we gotta get a story to hang it on." I'm really excited that Judd and I's first re-teaming since then did this well, and was so critically embraced, for the most part.