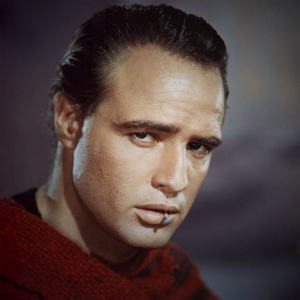 Oscar winner, letter writer, Godfather... drum innovator? Turns out Marlon Brando was all of those things, an avid inventor with multiple patents to his name including one for a revolutionary tuning system for conga drums. Said prototype still sits in a storage facility in West L.A., which NPR visited recently to get the scoop on Brando's secret scientific pursuits.

The actor was something of a conga nut, it seems, and enlisted the help of Latin jazz percussionist Poncho Sanchez decades ago while developing a new tuning system for conga drums. Though he'd been awarded four patents for various parts of the invention, Brando had difficulty, er, drumming up manufacturer interest before his death in 2004.

But wait, there's more! He had ideas for all kinds of inventions, including what Brando's patent lawyer Kevin Costanza describes as traction-optimizing swimming shoes. "He had these shoes that you can wear in the pool, that would increase friction as you walk on the bottom of the pool to give you a better workout."

Below, watch Brando on the Edward R. Murrow show, circa 1953, playing the conga drums: