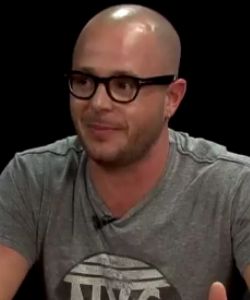 Kevin Pollak's highly entertaining and extremely long The Kevin Pollak Chat Show invited on screenwriter Damon Lindelof and allowed him to monologue freely about Star Trek, Cowboys & Aliens, and -- perhaps most notably -- working with Ridley Scott on Prometheus, and how the film relates to Scott's seminal sci-fi work. If this show weren't so damn intoxicating, it might've been a chore to get to the Alien(s)-related story. Fortunately, that's not the case. Full transcription and video after the jump.

Here's Lindelof's magnificent tale, beginning at the 2:18:00 (that's two hours and 18 minutes) mark. You may thank the saintly transcribers of Slashfilm for this tome.

"It started as an Alien prequel. That is what everybody wanted it to be. Obviously, Ridley Scott has not made a science fiction movie in 25 years, since Blade Runner, so the idea that he's returning to this genre is huge. But there is a real issue which is -- what is the state of the Alien franchise at this point in our lives? There has been Alien vs. Predator and all these things, and its been completely and totally diluted. I've always felt that really good prequels should be original movies. And the sequels to those prequels should not be the movie which already exists because, with all due respect to anyone who makes a prequel, but why would you ruin the greatest twist in the history of cinema, "Luke, I am your father", by showing me three movies which basically spoil that surprise. You can do movies which take place before Star Wars, but I don't need to see the story of the Skywalker clan. Show me something else which I can't guess the possible outcome of. There is no suspense in inevitability. So a true prequel should essentially proceed the events of the original film, but be about something entirely different, feature different characters , have an entirely different theme, although it takes place in that same world. That was my fundamental feeling about what this movie wanted to be.

And truth be told, it wasn't script doctoring in the strictest sense because the draft that existed before I came on was written by this guy named Jon Spaihts and it was very good. And there were a lot of things in the movie, Prometheus, which were Jon Spaihts and I feel like somewhere in the media reconstruction of this story, the tale is that I come in, I pitch an entirely new story, and its so original that everything else gets thrown out and that's what we're doing. In my brain, that's not exactly what happened. But I also do feel that this movie is the movie I would want to see as a fanboy, take place in that Alien universe, which precedes the events of the original Alien, but is not necessarily burdened by all the tropes of that franchise with Facehuggers and Chestbursters, and all that stuff that I love... but its sorta like, we've seen it before, can we do something different this time? And thats the movie that Ridley wanted to make. And when you're working with an auteur, you basically just shut your mouth and listen and try to transcribe and channel the vision of that person, and get out of the way.

So I read it, and it was good. This was not a disaster. There were really good ideas in that script. So I sent off an email.... Ridley works with these guys, Michael Ellenberg and Michael Costigan. I basically sent them an e-mail and said, here is what I think, and here is what I would do, if you were interested, and the next morning ... I get the call and they are like "We like your take, can you come in to Scott Free?" I walk into a room and there is Ridley Scott and an executive at Fox and I verbally present, here is everything in the script that I like now, here's some of my thinking on it -- what's the lay of the land? What are the issues that you guys are having? And we have a great 90 minute meeting in which I do a lot of listening. Again, I don't want to say I went in and WOWed them, when what really happened was I gave a really short presentation and then Ridley talked about the movie he wanted to make. And then, they decided to hire me. I had to go down to Fox and talk to Tom Rothman about what I wanted to do as well.

And then Sir Ridley Scott and I, and Michael Ellenberg, sat in a conference room for four hours a day, three days a week, and sort of went over it, again and again and again until I understood exactly what he wanted to do and I wrote it. It took me two weeks to write it, not a lot of time -- the time consuming part was the collaboration because he thinks, and I know this sounds like I'm brown-noising but, Ridley Scott is a true genius and he thinks in visual terms far beyond the comprehension of mortals like us but also understands story and mood and tone."

You can watch the interview right here; Prometheus is scheduled to start shooting later this year.