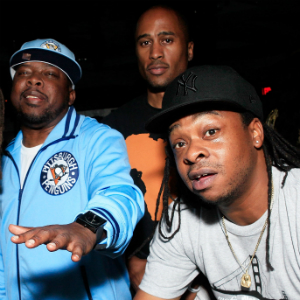 Certain members of legendary NYC hip-hop group A Tribe Called Quest had voiced mixed reactions to Michael Rapaport's incisive documentary Beats, Rhymes & Life: The Travels of A Tribe Called Quest even before its Sundance debut and subsequent distribution deal. But Friday night in Hollywood, all save one of Tribe's four members came out to support the film, sharing the emotional experience of watching their musical history -- and the complex behind-the-scenes clashes that led to their disbanding -- play out on screen.

"I'm having so many different emotions about it," Ali Shaheed Muhammad told Movieline after Beats, Rhymes & Life played to an enthusiastic crowd at L.A.'s Ford Ampitheatre, where he, Phife Dawg, and Jarobi White were in attendance. "Just kind of thinking about when we were just getting together at the age of 15 and having a dream of making music and not really realizing how it would sculpt and transform us as individuals, let alone the people that listen to your music. It's a really surreal feeling."

"I have seen it before but each time I see it I see something different," Ali continued. "L.A. seemed to have a real cool mellow kind of a cheer. I saw it in New York and it was a little bit different, which is reminiscent of every time we step on stage; each city has its own reaction. It reminded me of the early days when we first came out. As a matter of fact, right where Jimmy Kimmel is taped used to be a club called Water the Bush, and I remember it was one of the first appearances we had in Los Angeles." He paused. "I mean, I'm just thinking so much."

The doc opens with an extensive history of ATCQ's place within the Native Tongues movement in New York City in the late '80s and '90s, when the group mixed creatively with De La Soul, the Jungle Brothers, and other like-minded musicians. But the personal clashes between ATCQ's Q-Tip and Phife take center stage as Rapaport's film seeks to find out why the band broke up in 1998. Q-Tip, who was absent from Friday's premiere, is the only remaining member who hasn't made a public show of support for the film.

"I live my life like an open book, so I have nothing to hide," said Jarobi, acknowledging the private group matters writ large onscreen in the film, "so it was cool to see how they reacted. It solicited feelings from them, and that's some powerful stuff." While he would have preferred the film focus on the group's music, he appreciates that audiences are moved by the untold story of the group and the overriding love that still remains between ATCQ.

For Phife (AKA Malik Taylor), the film went even further into personal, private territory; it captured his longtime battle with diabetes, which hampered his health through ATCQ's rise in the '90s. In 2008, his wife Deisha Head Taylor became his kidney donor, a medical crisis that's emotionally chronicled in the film.

"It was really tough when we first learned that he was experiencing renal failure," she recalled. "So it was tough on us for the first couple of years. He had to go through dialysis and he was at the clinic three times a week and trying to travel, trying to do music. But once the kidney transplant started approaching and I found out I was a donor, his spirit just sort of changed. It was a miracle that I was the donor. It just changed our lives."

Phife gave credit to his wife for her sacrifice, and for changing her mind about appearing in the film. "Did you know she did not want to be in the film?" Phife said. "She's a brave heart." In the film, she advises Phife to get Q-Tip into therapy to work out their differences, but he resists. "Jesus is my therapist," he laughed.

So where was Q-Tip on Friday night, and why didn't he join the rest of A Tribe Called Quest in Los Angeles? Jarobi cited Q-Tip as having family obligations in New York, while Rapaport speculated that he was otherwise tied up. "Any word from Q-Tip? No, I haven't heard from him."