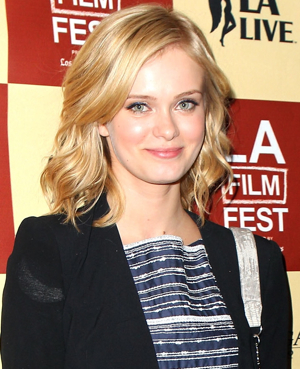 As evidenced by dozens of E! True Hollywood Stories, it is rare for a child actor to gracefully make the leap into a successful adult acting career. Yet Sara Paxton, the California-raised blonde who stars in Ti West's horror film The Innkeepers, has done just that, beginning with a role as "Child at Party" in 1997's Liar, Liar and continuing today with at least seven projects in various stages of production according to her IMDB page.

This week, Paxton took a break from the Los Angeles Film Festival excitement to discuss her creepy experience on the set of The Innkeepers, her seamless transition from child to adult actress and the death-defying underwater stunts required of her on Shark Night 3-D.

Ti West chose the Yankee Pedlar Inn as the setting for The Innkeepers after experiencing some strange things there while shooting his last film The House of the Devil. Did you experience anything strange while filming at the Yankee Pedlar?

There was definitely some weird stuff happening. Everyone was having crazy dreams. My door would violently fly open at night when no windows were open. The hotel is so old and askew though that I guess you could blame it on the old structure. It definitely had a creepy vibe to it though.

Characters in horror films are usually pretty tightly wound but your and Pat Healy's characters are both so normal -- relaxed at times, relatable and funny. Was it hard to achieve that balance of scary and light?

Not really. Ti's cool and laid back and so is Pat and we all really understood each other. We communicate really well and were just on the same wavelength with the entire crew. I think the reason that people are so happy with the movie is because everyone get along and Ti's amazing at what he does. The very first day went so well that we finished like four hours ahead of schedule.

With such a laid-back vibe on set, was it had getting in the mindset for some of the scarier moments of the film?

It's funny because we did all of the serious stuff in two days, back to back. And that all happened in this gross, disgusting, dusty basement so there wasn't really a lot of time to joke around. It worked out. We just had to be more serious. 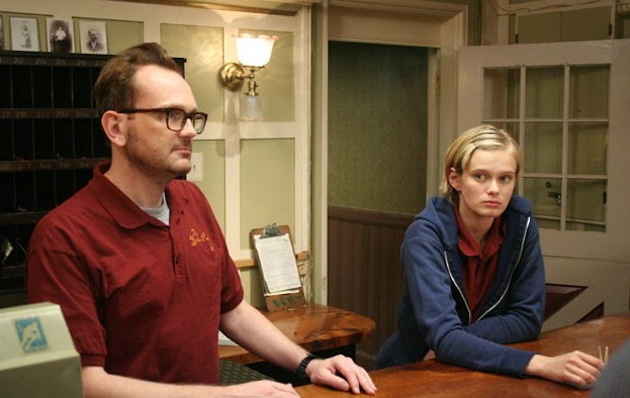 You've played everything from a mermaid in Aquamarine to a torture victim in the Last House on the Left remake. Do you find that lighter or darker roles come more naturally to you?

I don't know. I have to find the right part of myself and put it into that character. I feel like everyone has a full deck of cards and I just have to pull the right card for that character. The more comedic roles come easier to me though because I see myself as a silly, easy-going person. I think my Innkeepers character Claire though is the closest character to me that I've ever played.

You were able to make the transition from child acting to adult acting very gracefully. What do you think made that possible?

That's very nice of you to say. Maybe it's because when I was younger and started acting, I wasn't good at sports and didn't have any other special talents. Acting was my after-school activity. I never planned on growing up and becoming an actor. I always wanted to go to school and become a veterinarian so I think when I got older and suddenly realized that it was my passion, it was just a natural moment. I never felt pushed. My family has always supported me completely and kept me grounded. I never got lost in child Hollywood actor weirdness.

Where do you see yourself 20 years from now?

I still have so many goals that I want to accomplish. I just want to keep working, meeting new people and learning. Every new person I meet is a new experience. I just feel really lucky and grateful to be doing this job and I feel like a lot of people take it for granted. I'd love to work with super amazing actresses like Meryl Streep or Goldie Hawn or people who are my idols. That is the dream of mine.

According to IMDB, you're going to be working with a ton of actors in Garry Marshall's comedy New Year's Eve.

You know what's so weird? I'm not in that movie! I have no idea why it is on my IMDB page, but everyone asks me about that.

Anyone can go in there and change the IMDB information though. For a while, someone had listed my middle name as Emily and said that I was born in Connecticut. I'd go into auditions and the casting director would say, "Hi Sara Emily from Connecticut who's going to be in New Year's Eve!"

Awkward! I'd probably make up a fake set story from New Year's Eve and start lying about a wealthy family back in Connecticut.

Yeah, I know. I wish I was in that movie though! Maybe I could do craft services so that I could at least say I was a part of it.

Well you're definitely in Shark Night 3-D. What can we expect from the film and is it going to be our generation's Jaws?

I haven't seen it yet but I know that that is what the director David Ellis was aiming for. He could have taken a few different directions with it, but he definitely wanted to take the Jaws route.

What was it like filming all of those underwater scenes with animatronic sharks?

It was crazy. I was trained by U.S. Navy Seals to do underwater combat and holding my breath and scuba diving and crap like that. It was amazing, amazing, amazing that I even got to be a part of something that cool. We got to ride Jet Skis and of course the animatronic sharks looked so real. It was so scary. All of them had real shark teeth in them. 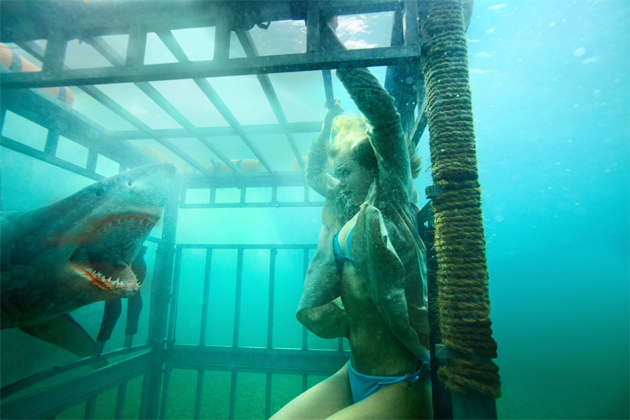 They would have looked rubbery if they weren't real. They were built to scale. Everything seemed real about them. They would fly at us at 40 miles per hour and it would thrash its jaw with its head in our face. And the whole time, we're underwater with no air. The director had an underwater sound system so he'd yell, "Sara! Move to the left!" And I'd have to swiim closer to the shark while I am completely blind, because I don't have goggles, and I'm holding my breath, thinking, "This shark is about to tear out my jugular and I'm going to die."

How long can you hold your breath now?

A really long time actually, but they would give us masks when we first went underwater because we had to see where our marks were. And the scuba divers would communicate with us with dry-erase boards and hand signals. We'd get into our spots, take off our masks, be completely blind, keep the regulators in and then David would say, "3, 2" and when he got to 2 we had to take a big gulp of air and toss the regulator away from us and start the action sequence.

It was terrifying at first. You had to go into a Zen, yoga-master-like mindset because if you had an inch of panic, it would speed up your heart rate -- which wastes more oxygen.

Did you have to pass a swimming test to get the role?

Surprisingly, no! I played a mermaid in Aquamarine who is a champion swimmer so I think people just assume I am a really great swimmer. The first week though, they put the entire cast into an Olympic-sized pool and let us swim and checked to see how long we could hold our breath.

Switching gears here, you're also in the upcoming adaptation of the Western series Big Valley.

That credit is actually right! I don't know when we are going to start that though because there are so many big actors in the movie -- like Stephen Moyer, Richard Dreyfuss, Jessica Lange -- and I think they're all filming now. I would really love to get going on it now.

Did you watch all of the original episodes?

Totally, I did before my audition.

What part of starring in a Western are you most excited for?

Well my character rides horses and is kind of a bad ass. I can shoot people and stuff, and it's kind of awesome.

Finally, at Movieline we play a game called My Favorite Scene where we ask actors and actresses to name one film scene that really affected or just entertained them. What is your favorite scene?

Well, I just had a Julia Roberts marathon and I was watching My Best Friend's Wedding, which is a romantic comedy. It's not Erin Brockovich or anything, which is also a great movie, but Julia Roberts is just so good in everything that she does. It's like she lights up the screen. I love watching amazing actors and actresses that you can't take your eyes off of because everything they are doing -- even if it is just twiddling their thumbs or scratching their eye -- it's just interesting. That's why I love this job and that's why this industry came around. People are fascinating and we want to watch them.