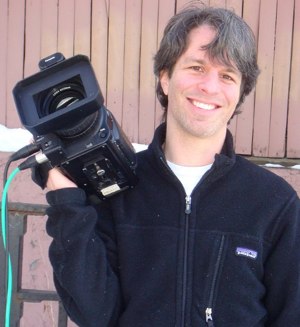 If, as some have suggested, we are inhabiting a new golden age of documentaries, then it will be necessary at some point to determine its standard bearers. There's Errol Morris, the Twitter-friendly elder statesman. There's Ondi Timoner, the culture-watching, footage-hoarding obsessive. There's Morgan Spurlock, the avatar of self-regard. There's Daniel Kraus, the vocation-spying heir to Frederick Wiseman. There's Charles Ferguson, the bone-dry think-tanker whose Wall Street wonkery eclipsed Banksy at this year's Oscars. (Oh, did I mention there's Banksy?) And among a handful of others, there's Marshall Curry -- you know, the humane one.

Which isn't to suggest his peers are necessarily inhumane (except for the assholes who made Catfish). Still, Curry's latest, If a Tree Falls: A Story of the Earth Liberation Front (opening today in New York and rolling out nationally through July), extends his tradition of penetrating stories without the emotional and personal interference that afflicts so much of contemporary nonfiction. The film chronicles a decade in the life of Daniel McGowan, a middle-class kid from New York whose involvement with the Front -- including a 2001 arson in Oregon -- earned him an eco-terrorist label and a prospective life sentence in federal prison. It's hardly austere; subjects speak directly to the camera at times, and Curry's initial involvement arose from his wife's employment of McGowan at the domestic-violence center where he was arrested in 2005. But what this and Curry's other films say about their subjects -- from Cory Booker, the mayoral hopeful of Curry's Academy Award-nominated 2005 debut Street Fight, to the aspirational kids and parents of last year's criminally underseen Racing Dreams -- yields a remarkable clarity about the perils of modern idealism. Our goals have a cost that's often beyond our means, which Curry lays out precisely and without favor.

Yet his is not the slavish adherence to facts and plot that Werner Herzog -- no nonfiction slouch himself -- has famously called "the accountant's truth." It is instead the instinct to let subjects, stories and themes speak for themselves, while forming a narrative allowing viewers to draw their own conclusions. This has fallen increasingly out of favor in the new golden age of docs, when easy access to technology and the social trend toward narcissism have made personal storytelling indistinguishable from traditional journalism. Sometimes it yields revelations; Doug Block (51 Birch Street), Jonathan Caouette (Tarnation) and of course Banksy (Exit Through the Gift Shop) have all created classics of the form from the wealth of their own archives. I love a guy like Marshall Curry, however, for owning a signature that essentially amounts to owning no signature at all.

"Basically I was just very explicit with people regarding my philosophy," Curry told me over coffee this week in New York, explaining many prospective interviewees' dread of misrepresentation. "I'm not interested in doing that. I think the story's complicated. I think these issues are complicated. And I'm honestly interested in understanding why people did what they did and think what they think. I think people can just sort of sense that. But when you say, 'Listen, this movie is not going to be your point of view, but it will include your point of view, and I'm going to be fair with you. I understand your fears. I know that there are people who edit people out of context and screw them. I'm not going to do that.' When you tell people that you understand the process, it sets them at ease a little bit. Then you have a conversation with them. When I'm honestly curious, they can feel it."

Curry's subjects are fond of him as well. Or at least they trust him, which begets fondness. If a Tree Falls, for example, has earned the endorsement of both former ELF spokesman Leslie James Pickering and assistant US attorney (and ELF prosecutor) Kirk Engdall -- both of whom contribute some of Tree's most thoughtful insights about the nature and consequences of protest.

The key to its success lies in its subtitle: A story, not the story. Faced with the choice of making a survey documentary about the ELF movement or a narrowed-down tale of one man and his radicalization, Curry hardly faced a choice at all. You play to your strengths. The arc of McGowan's life intersects enough of his ELF cohort -- from guilt-ridden ex-girlfriends to Web 1.0 suits who took off for yacht rides between planning arsons to dumpster-diving anarchists who lived in squat houses and sold pot -- to present a comprehensive glimpse of the movement that eventually found McGowan facing terrorism charges.