Quentin Tarantino's Django Unchained Set for Christmas 2012, and 5 Other Stories You'll Be Talking About Today 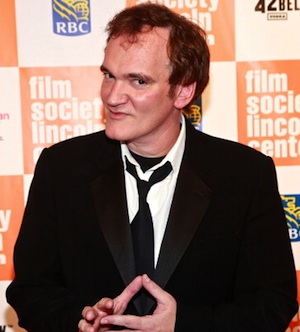 Also in this Wednesday edition of The Broadsheet: David O. Russell discussed for Maleficent... Snow White and the Huntsman gets a rewrite... Warner Bros. goes to China... and more ahead.

· Quentin Tarantino just one-upped Santa Claus. The Weinstein Company has announced that Django Unchained will hit theaters on Dec. 25, 2012, just four days after The Lone Ranger and a week after The Hobbit: An Unexpected Journey. The Tarantino-directed film -- about a slave who goes on a revenge quest to save his wife -- has not finalized any casting yet, but Leonardo DiCaprio, Christoph Waltz and Samuel L. Jackson have been discussed; it's expected to start shooting early this fall. Fun fact: Django Unchained will arrive in theaters 15 years to the day after Tarantino's Jackie Brown was released. [Coming Soon]

· Is David O. Russell "circling" the Angelina Jolie-led Maleficent, the live-action alternate take on Sleeping Beauty? He is according to one report, but Russell himself seems to be courting Jolie for another movie, The Silver Lining Playbook, which he may direct next with Mark Wahlberg starring. "You know, Angelina would really be awesome [for Playbook]," he told Vulture on Monday night. "I think Angelina would love to be in it, but I don't know if that'll happen because of some conflicts in scheduling and other stuff. But I love her and I've loved talking to her about several projects [...] I think that she's a loaded weapon and ready to be deployed." [THR]

· Hopefully Kristen Stewart, Chris Hemsworth and Charlize Theron didn't memorize too much of the script for Snow White and The Huntsman. Universal has hired Hossein Amini to do a rewrite of the script. Snow White is due in theaters in less than 12 months, FYI. [Deadline]

· It's always a good day when a member of The Lonely Island makes news, so let's celebrate the fact that Akiva Schaffer (who along with Andy Samberg and Jorma Taccone make up the Saturday Night Live Digital Short comedy troupe) is in talks to join Neighborhood Watch for Twentieth Century Fox. Ben Stiller is in talks as well, but he might be too busy to take a role in the film, which was written by Seth Rogen and Evan Goldberg. [Deadline]

· Paramount has acquired the spec script Bastards by Justin Malen. The pitch is about two brothers who go out to find their real father when their mother reveals she slept with many "powerful" men in the '70s. So, Mamma Mia mixed with Step Brothers. [Deadline]

· Via a press release, Warner Bros. announces that they will be the first studio to offer movies to the People's Republic of China via On Demand services. [Press Release]