Let's take a closer look at little Dakota Fanning's new ad campaign as the spokesmodel for Marc Jacobs' latest fragrance, Oh, Lola. On the one hand, the 17-year-old Fanning has been preparing us for this moment for years, what with her increasingly mature film roles of late (a lesbian make-out with Kristen Stewart in The Runaways? How edgy!). On the other hand, is anyone ready to see Dakota Fanning in a suggestive pose with a flower in her crotch? 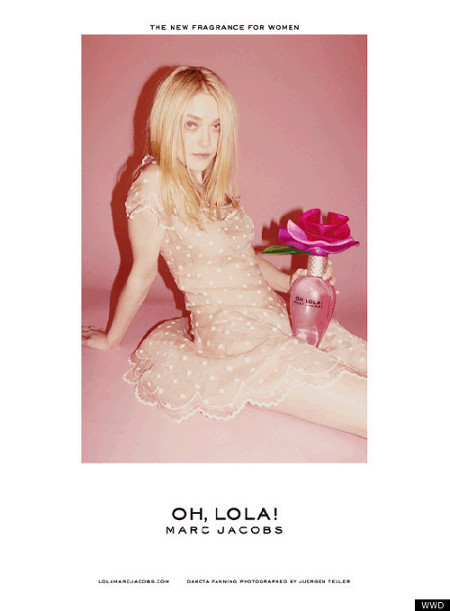 I suppose sometimes a flower in the crotch is just a flower in the crotch and not, say, an obvious metaphor for something else. But consider those confident, come-hither doe eyes, the girly-sweet pink palette, the harsh shock of an American Apparel-esque camera flash, and the fact that the perfume is clearly named after Nabokov's famous young temptress; it's clear we can't all keep pretend Fanning's still a little girl.

(Luckily, there's a new little Fanning on the scene who will stay young and innocent forever! At least, for another few years. Then we'll weep again.)

The upside to Fanning's suggestive new perfume spread is that it might just help her transition from her preternatural-yet-cherubic childhood career into that of a young adult actress. She was never the Disney/Nickelodeon type of bubblegum kid performer, anyway; those tween vets have a tougher time making the leap from innocent tykes to young adults who canoodle their scrawny pop star boyfriends on yachts and go the Lohan route in the public eye. (Selena Gomez, I'm looking at you.)

And the more I keep looking at Dakota-as-Lolita, the more comfortable I am with this bold new (dare I say it?) sexually empowered persona of hers. With her filmography she's 17 going on 22, at least. And at least one of her upcoming films will see her (and Sundance darling Elizabeth Olsen) tackle the challenge of losing her virginity. But is the world ready to say goodbye to the innocent Dakota Fanning it once knew?