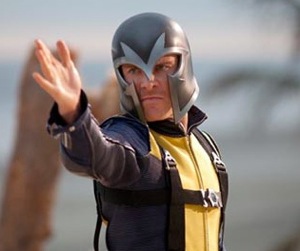 A new article posted at the website Think Progress draws up the queer/coming-out parallels in X-Men: First Class, and if you haven't seen the movie, you'll find much of the evidence undeniable: Hank McCoy (Nicholas Hoult) even utters to his CIA boss, "You didn't ask, so I didn't tell" after he's outed as a mutant by Professor Xavier. But one dissenting commenter on the article provoked an actual X-Men: First Class screenwriter to jump in and clarify that all the LGBT metaphors (among other civil rights implications) were very intentional.

After commenter Deborah Hoff disagreed with the author's LGBT parallels (traced back to Iceman's "coming out" of sorts in X2), First Class scribe Zack Stentz jumped to the film's defense. Hoff's offending comment read as such:

"Um, nothing really gay about it. I've loved all Marvel comics since a kid and there never was nor is there anything gay in X-Men. Say that to Wolverine and he'd likely rip ya a new one. Not that they shouldn't have a gay super hero. There just wasn't ever any in X-men. The men in the film were friends. I think it's kinda homophobic to assume every male freindship is gay. So, they shared a tender moment. They didn't have sex. As Stan Lee used to say, 'Nuff said.'"

A couple dozen comments later, Stentz appeared with a rejoinder:

"Um, no offense, but you're wrong. I helped write the movie, and can tell you the gay rights/ post-holocaust Jewish identity / civil rights allegory stuff was all put in there on purpose. Joss Whedon designed the whole "Cure" storyline in the comic books specifically as a gay allegory, and Bryan Singer wove his own feelings of outsiderdom as a gay man into the movie series. The whole "Have you ever tried NOT being a mutant" coming out scene in X2 isn't even particularly subtle, while it is effective."

Glad that debate's over! Now we can get back to the real issues, like more January Jones jokes.