Jaimie Alexander on Her Thor Breakthrough and Visions of Lara Croft 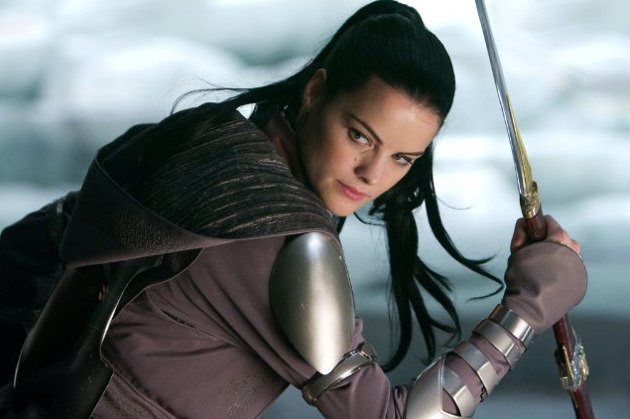 And then a few years later, Thor arrives. How did you become involved with it?

I was probably one of the last few girls who went in to audition for the role of Sif. I had read about the project months and months in advance, and I said, "I've got to get in for this. I really want to get in for this." And then I did, and I literally just read with the casting director because Kenneth Branagh was in Sweden at the time and couldn't be there for the audition. They sent my tape over to him, and within a week he had phoned my manager and said, "I'd like to get her on a Skype conversation so I can get to know her personality and just get to know her a little bit more." Basically he wanted to direct me on Skype based on what he'd seen on the tape.

So after speaking with him, I went back in for another audition and pretty much did the scene a ton of different ways so he could see my range. And within another week I was cast as Sif. It was very quick -- a bit bizarre. Again, it just felt like that was how it was supposed to be, it was meant to be.

Directing via Skype? How does that work?

It went like this: I'd have a Skype conversation, and a few days later I'd go back in for another reading. So I kind of had to write down his notes for the things he wanted to see -- that sort of thing. But it was nerve-wracking. I was nervous. And the first thing he said to me was, "I know you must be nervous. I know how nerve-wracking this is. Just go in, relax and have a good time. I want this to be a good experience for you." He was an actor before he was a director, and I think that made all the difference for me. The nerves went out the door and I felt really comfortable.

That's interesting. I imagine this process as being nerve-wracking for Branagh as well; it's the biggest thing he's taken on by far.

If he was nervous, I couldn't tell. I've really got to hand it to him: He took this monster of a movie and did such an amazing job with it. He made us all feel so comfortable. Before we started shooting, he had myself, Tom [Hiddleston], Chris [Hemsworth], Josh [Dallas], Ray [Stevenson] and Tad [Asano] train together, so that when we got on film we were very comfortable with each other and we do these fight sequences and know how each other moves and that sort of thing. So we all kind of bonded during rehearsal, and it just became fun when we went to camera. Nobody was super-nervous. We could have more than one take in a scene if we needed it. Kenneth was there to lead us in the right direction. I was nervous going into it, but after a few weeks of rehearsal, I thought, "This is going to be great, this is going to be fun." And it was.

How much does a sense of family develop under those conditions -- even on such a huge project with so many moving parts?

There's a huge sense of family -- a sense of loyalty, a sense of belonging. I believe that is mainly die to Kenneth having us all work together so closely before we went in for actual filming. He created such a safe environment where we could work together, and when we went to Sydney [for Thor's world premiere] and then had the Hollywood premiere, it was just one big family reunion. I think I went up to Ray Stevenson and punched him in the arm. That's how we say "Hi." It was a lot of fun.

Presumably the family will reunite for a sequel as well. And to the extent it's job security, some franchise roles just follow actors through everything they do. Have you thought about the ups and downs of being associated with Thor for a while to come?

I loved playing Sif. She's definitely one of my favorite characters I've ever taken on, and I would be delighted to be in more Marvel films playing her. It was such good experience that I could only wish to do that again, and I think there's a strong possibility that that could happen. Fingers crossed! I have no problem with that. I don't see a downside at all. I think we're blessed as actors to be working like we are and with the people we work with. I would take a sequel as a tremendous, tremendous blessing that I would welcome with open arms.

Good answer! Is there anything else coming up for you that's not top secret? Anything on your radar or that you'd like to do?

I can tell you what I'm interested in right now. I've obviously been hearing about a Tomb Raider reboot, which I think would be pretty awesome -- Lara Croft. Again, anything that's very physical. I'm reading a few scripts here and there, and we'll see. It's all sort of up in the air. I also have to be careful not to be stereotyped into just these very physical superhero roles, and that's why recently I did a post-Civil War drama called Savannah, in which I play a Scarlett O'Hara type of character. I also did an indie film with Peter Facinelli called Loosies, which he wrote and starred in. That was shot in the vein of Midnight Cowboy; that was sort of the style of it. But it's great. I'm just trying to branch out and do as many projects as I can. In this little project I'm doing right now I play a CIA agent. So I'm really just looking to get my hands into all kinds of things right now.

Are you going to pursue the Lara Croft project?

I would love to pursue Lara Croft. And the thing is, you know, I'm not going to try and be Angelina Jolie. She's her own woman, and she did a fantastic job as Lara Croft. If that opportunity arises for me, then I would put my own spin on Lara Croft. There's no way I would try and copy what she did. I think that's a huge mistake with actors and actresses who are taking on a role that was previously done by someone else.

How would you set your Lara Croft apart?

Well, let's use Angelina Jolie as an example. She has her own sex appeal. She's built very differently than I am. She's her own woman. And I think that if you try to mimic that -- if I was trying to pull off the exact way she said certain things and how she carried herself -- then that's not being me. That's just copying another actor. Whereas you can look to other actors for inspiration, you should still maintain your own identity through a character. And that's something I would love to tackle.

An edited portion of this interview was published previously on Movieline.