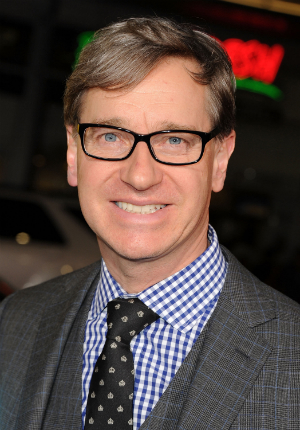 Behind the femme-dominated laughs of this Friday's Bridesmaids -- the movie that will prove ladies can carry blockbuster comedies, or not, but probably so -- is writer, actor, director, Judd Apatow compatriot, and creator of the well-loved cult series Freaks and Geeks, Paul Feig. After a successful run directing episodes of your favorite shows (The Office, Arrested Development), Feig is finally staking his claim in the film world with the Kristen Wiig starrer, about a woman tapped to play maid of honor at her best friend's wedding. But Feig, on the brink of a likely summer hit, is noticeably nervous.

"I feel there's a lot riding on this for very funny women in comedy," Feig admitted to Movieline via telephone Wednesday. "If it doesn't do well or doesn't do box office the way people want it to then it's very easy for them to go, 'Oh well -- see, you can't have women carrying movies!'"

Feig's right. Bridemaids, which is tracking well and has earned rave reviews ever since its SXSW debut earlier this year, will be a test of sorts for the drawing power of female comedians at the box office. But star, Saturday Night Live favorite, and co-writer (with Annie Mumolo) Wiig is arguably the most popular comic actress of the moment and is supported by a talented cast that includes Maya Rudolph, Wendi McClendon-Covey, Melissa McCarthy, Rose Byrne, Ellie Kemper, and the late Jill Clayburgh. (Not to mention adorable Chris Dowd as Wiig's love interest, Jon Hamm as her douchebag sometimes booty call, and a surprise cameo by a pop group that ties everything together kind of perfectly.)

Post-Bridesmaids, Feig "has a few deals swirling" and intends on writing an original script for longtime collaborator Apatow to produce -- and he's leaving the door wide open for a sequel. Read on as Feig chats with Movieline about his opening weekend nerves, why Bridesmaids is the rare comedy that doesn't spoil the best jokes in its trailers, how the film's infamous gross-out scene developed and why it turns off the faint-hearted ("There are shit people, and there are non-shit people"), and why it doesn't bother him that everything Judd Apatow touches becomes known as an Apatow movie.

I've been reading your Tweets. Do I sense a feeling of nervousness going into your opening weekend?

I'm very nervous. It's very nerve-wracking, you know, because you want it to do well. And actually as it gets a good response it makes you more nervous. You're like, "Oh boy, what if after all that it still doesn't do well?"

Really, why is that?

Yeah. I feel there's a lot riding on this for very funny women in comedy, because if it doesn't do well or doesn't do box office the way people want it to then it's very easy for them to go, "Oh well -- see, you can't have women carrying movies!" And that would be such an enormous tragedy, as we all know.

So on top of the pressure of directing a movie, you feel the added responsibility of an entire community of performers?

In some weird way -- it's probably me overhyping it -- but the intention of this movie, beyond making just an awesome movie that Kristen Wiig can be fantastic in and to bring her vision to the screen, is also, you know, I've just been such a fan of female comedians and actresses. It's become a watershed sort of a thing, and it's like, let's not put too much pressure on it! Let's just realize these are really funny women and really funny women should be doing tons more movies.

Totally with you. I saw Bridesmaids at SXSW, and ever since then I've been barely containing my desire to karaoke to [recording artist redacted] until the movie came out, because otherwise I'd be spoiling that great moment for everybody.

[Laughs] Oh, you're very funny. No, we tried to keep it under wraps and occasionally some article would come out and give it away and we're like, "Hey, shut up!"

That's particularly tough when opening comedies; you don't want to ruin the jokes in the marketing materials, and yet you have to give people a sense of what the film's like.

That's the hardest thing we all grapple with in terms of the marketing. You're like, "Don't give away that joke!" The greatest way for people to experience a comedy is to go in not knowing anything about it. But because of marketing, it's impossible. Marketing meaning that in order to get people to come you can't just go, "Hey, there's a great movie -- we're not going to show you anything from it but trust us!" That's why it's actually good that we shoot so much extra material that, as you notice now, a lot of the stuff isn't actually in the movie.

Right! I noticed that right away and was curious as to whether that was intentional so you wouldn't have to give away the best gags from the final cut.

Well, it's kind of half and half. The irony is that the studio gets the dailies as we're shooting them, so they have everything as they go along and they generally turn it over to the marketing department, so they're already combing through stuff finding things. Actually at a certain point when we're putting the movie together we'll say, "Hey, send us the things you pulled that you think are funny," because maybe they saw something that we missed. But our feeling is as long as we're putting stuff that's funny into the trailer and what's in the movie is as funny or funnier, then you wouldn't go, "Hey, wait a minute, what happened here!" When I was at the lab, you read the comment boards or Twitter and everyone's all like, "Oh, great, now I don't have to see it because I saw all the funny moments in the trailer." I just want to scream from the roof, "NONE of them are in the trailer!" but that, actually, will sound bad too. [Laughs]

On the one hand I'm glad that some of my favorite parts aren't spoiled in the trailers. But I also find it interesting that entire subplots seen in the trailers don't appear in the final film -- Annie's sad dating life, with the kid eating the birth control pill...

Right. But you'll be happy to know that's in the extended cut that will be coming out on DVD. So it is technically in there, just not yet.

That was the hard part. When you make the theatrical movie, you do feel that's what you want to put forward because you worked so hard to make the pace, the story, everything really work well. But when we faced the extended cut it was more saying, "Let's not just dump stuff in just to dump it in." But there were a few things we just like, that, because of our extensive running length it was like, "I would miss these if they weren't in there but it's just going to make the movie too long." We shot a couple of blind date scenes for her but this one was really funny, let's put that in. There are a couple of funny scenes that set it up, and moments in other scenes where we had a second joke that we thought was very funny... but we were very judicious about what we put in, we didn't make it one of those 'An Extra 20 Minutes!' Because then the movie just wears out its welcome.

You spoke previously about using test screenings to help edit the film, but when do you ever know you're done?

Eventually you just run out of time. [Laughs] They say you never finish a movie, they just take it away from you. But we were in post for a long time... the first time you do a test screening you bring a product that you're pretty sure works, or you hope works. And then when you show it you hear the parts that don't get as big of a response, and you switch out and move it forward. And Judd's really good at knowing, "OK, I think we're there, I think we're good. Let's make one more pass and just see if there's anything we're missing."

Improv played a key role in the performances you got from your cast, many of whom were alumni of the Groundlings together. Which scene do you think benefited most from improvisation?

The one for me that stands out is the airplane scene, and just all of the stuff that Kristen's doing. It was definitely scripted out, some of those lines she was hitting, but it was just her taking it and running with it. I shot them over and over and over again partly selfishly because she was making me laugh so much, I just wanted to see what she was going to do if I started it again. [Laughs] So yeah, it was always throwing such curveballs at us, but it was the whole cast. It just worked well. We started with a structured thing and we had lines lined up and that sort of then devolved into, "Try this," or "Try that," or I'd give them an idea. The girls always had a laugh because my catchphrase is "Dealer's Choice!" Which means just take it anywhere you want it to go, do whatever you want with it, and let's see if we get anything out of it.

Can we talk about the gross-out scene? It's one of the big moments people are already talking about, and it's also the kind of gag that seems to be drawing men in. Why did you change the original dress fantasy sequence into this gross-out bonanza?

The dress scene that was written was really fun, but it was tonally different.

Well, it was Kristen's character Annie liking this dress so much that she has this really goofy, funny fantasy about what her life would be like wearing this dress. She runs into Matt Damon and Christian Bale has her hide in his muscles, and men are fighting over her. It was really funny but it felt for us that to go into a fantasy sequence wouldn't tonally match what we wanted. And we also wanted a set piece, a higher stakes comedy scene. It was Judd, he was like, "What do we do? OK, they all get food poisoning!" For us it was like, "God, that's really funny" so all of us ran off to write our version of the scene and compared notes and played with it a lot. Judd really steered that one along because there was the fear that it would just be some kind of gross-out scene, but like he said, the whole thing of it is the comedy of people trying to pretend nothing is happening.