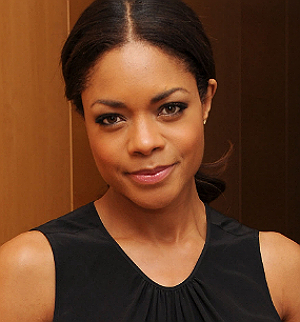 "I'm sitting here in this wonderful room with an amazing view, in the sunlight -- so I'm happy." English actress Naomie Harris, co-star of this week's indie biopic The First Grader, sounded genuinely contented when she rang Movieline to discuss the socially conscious, tear-jerking drama in which she plays a rural Kenyan teacher trying to help an 84-year-old man seize his right to a free education. After the film's unusually demanding and tricky shoot -- Harris taught actual elementary school for weeks to the local non-actor children in the cast and never broke character with her young co-stars -- it's easy to see why.

The First Grader is director Justin Chadwick's gorgeously shot biopic of Kimani Maruge (played with moist-eyed conviction by Oliver Litondo), an octogenarian survivor of the Mau Mau Rebellion who drew international acclaim for demanding his right to an education after the Kenyan government announced free education for all in 2003. Harris, playing the school principal, Jane, is Maruge's only ally through it all, the lone figure willing to support Maruge's quest and acknowledge the sacrifices he made during British colonialism. Movieline spoke with Harris by phone about the unconventional approach she and director Chadwick brought to the shoot, how the production has already begun giving back to its host community in Kenya, and how Harris' Pirates of the Caribbean character, Tia Dalma/Calypso, may be back... someday.

The First Grader tells such a moving story, and you and Oliver give very deeply felt performances.

Thank you! That's so great to hear because before I'd been doing interviews without people having seen the film, so I haven't really heard people's responses. It's really lovely to hear that people enjoy it.

There are so many different compelling elements to the real life story to begin with. How exactly did Justin get you involved in the project? I heard it was an unusually quick process.

Yes, very late on. I think I only joined two weeks before I was flown out, it was one of those really fast ones. I think I came on board so late in the game partly because they were trying to get South African funding -- we did get funding from South Africa, and one of the stipulations was that it was shot in South Africa and used as much of a South African cast as possible. So that was kind of the idea behind it. And then at the last minute Justin kind of said, 'No, no -- it's a Kenyan story, it has to be shot in Kenya.' So then they were able to open up casting and I was apparently his first choice. I'd never met Justin before but he'd seen my work and really liked it, so he asked to meet me and asked me to come on-board!

He must have gotten pretty lucky being able to get you on-board in just a few weeks!

It was perfect timing for me because I had just done sort of a Hollywood movie, which was quite big, and I was coming back from that wanting to do something small, just a bit more intimate, you know? And then this offer came through and I was like, 'This is exactly what I wanted!' I was like, 'I want to go abroad, and I want to do something like an indie film, really small and intimate with a great bunch of people,' and then I got this call: 'Would you like to go and do this movie, The First Grader?' So it all worked out, it was fantastic actually.

Was that Ninja Assassin that you had just come off of?

That was a huge movie. Seems like it couldn't have been more different.

How much learning did you have to do for this role, not just to master the accent but of the culture and history of the Kenyan people whose community you were coming in to portray?

It was kind of like a baptism by fire. Basically, Justin asked me to get my Kenyan accent sorted and done before I arrived in Kenya, which is what I did. So I had that kind of under my belt. And then I was taken to the school where we were filming and I was introduced as their new teacher. So that's how the kids saw me. For two weeks before we started filming I had to come up with lesson plans and teach the children in order to get to know them, and that was the most challenging part about doing the whole thing -- the time when I really thought, 'Can I do this? Have I bitten off way more than I can chew?' Because I have a younger brother and sister, and also my stepdad is a teacher, so I've been into school to work with his children at school and I've been around kids a lot -- I go into schools to do anti-bullying, anti-smoking talks and things like that -- so I just felt I was really good with kids and wouldn't have a problem.

But they're completely different to any other kids I've met before, because they're so shy and so respectful. I came in and I was like, 'Hi! I'm Teacher Jane,' with a Kenyan accent, and they just stared at me and were quite unresponsive and stayed that way for many days. It took a full two weeks before they properly thawed out and you started to see their personalities. In the Masai culture in particular it's disrespectful to look an adult in the eye, let alone engage in a dialogue with them. So it took them ages to start messing around and being naughty, which is what we wanted, you know -- we wanted their joy and their personalities. It took them ages to break through that shell and start opening up.

I have to tell you one of the most difficult things that I've done; despite the difficulties and my panic in the beginning, when they did things like start being naughty or come up and hold my hand or hit me on the head, normal kid stuff, I loved it. I was like, 'Yes! I've gotten through to them, I've been accepted!' It was a wonderful feeling.

That's amazing. Did you create your own lesson plans modeled on Western styles of teaching?

I did, yeah. It was difficult because my stepdad actually teaches disabled children and has a lot of resources in terms of computers and teaching aides and things like that, which we just didn't have. He would say to me, 'OK, just on the projector --' and I'd go, 'Nope, there's no projector here.' So I had to obviously adapt.

That's a demanding sort of double role for you to play. So did you stay in character the entire time you were in Kenya interacting with the kids?

Do they know yet that you're an actor or who you really are?

I don't know, actually. They'll know when we go back; we're going back in June with the film and I'm not going to be Teacher Jane. We're going to show all the kids the film -- edited, though, edited out the more troubling parts, because those kids have never seen TV or film before, so we have to kind of tone it down for them.

What an unusual shooting experience, then.

Completely. We were basically living in the same vicinity as them, and there were no trailers or anything like that. There were two toilets which were holes in the ground, surrounded by corrugated iron, and that was it. I had a gap sometimes in the day in between shooting and I'd sleep with the kids on the floor of the classroom. It was really just like being one of them, you know? It was just really integrating with them and being immersed in the culture.