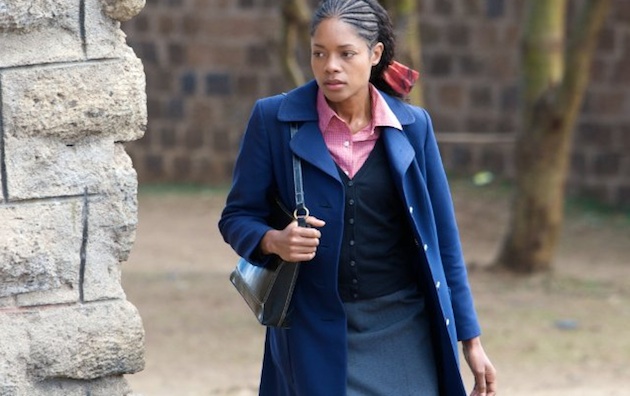 I'll be curious to hear what your experience is like next month, taking the film back to show to the kids and seeing their reactions to the entire thing. You must have changed their normal lives so much; how conscious were you of the lasting impact this film shoot might have?

Justin and the production company were really sensitive to the fact that ultimately we were going to be there for 36 days and then we were going to be gone. So we tried not to have too much of an impact. Unfortunately, it's difficult to come in with crews and all these things they're not used to without it having an impact. The ethos of most films is that you make a film, you exploit the community, you exploit the environment, and it's OK because you made a great film, you know? Whereas Justin and the production company's ethos on this was that we have to make a film in such a way that it enriches the lives of the community and everybody that's involved. So the school that we filmed in that's onscreen had no running water, and the production company, after we finished, put in running water. They had no electricity; they put in electricity for them. The classrooms, as you saw, were quite rundown, and they re-plastered, did the flooring, put in new roofing, and all of that. There have been three charities set up: One for the local community, one for the school that we filmed in, and one for the school across the road which, when there weren't enough children in the school, then we would bring over a few children from the other school across the road. So everybody benefited and hopefully was better off after we finished filming.

How do you view the balance that you've maintained, or tried to maintain, in your work between Hollywood films and more independent projects?

I don't know. People sort of say, 'Your career is really eclectic because you do this, and then you do that...' And I just think I respond in terms of what excites me. I've never really been really motivated by money. I've never been that person who wants a Rolls Royce or wants to live in a mansion or what have you. It's really liberating for me because it means I can just do work that I'm excited about. I just think, 'Wow, that's a new challenge!' Doing something where I work with zombies, or doing something where I work with ninjas. And likewise, it's a new challenge where I get to be in Kenya and pretend to be a teacher. I love, love, love that. That's what keeps me excited. So I just basically follow my heart and my passion. If I enjoy it, then I do it.

You're in New York at the moment, but where are you based? Still living in London?

Yes, I live in London. I'm really close to my family, so I don't imagine really that I will ever move. I live on the same street as my family, actually. I live across the road. I'm a real family person!

Are your younger siblings especially excited when you're in a bigger movie, like the Pirates of the Caribbean films?

You know, it's funny because they're really clever and really clued up. So they're equally excited for both. My brother came to see The First Grader, it was the closing film at the London Film Festival. My brother's 15 and he was just like, 'It was really sweet.' He doesn't say a lot, but... you know how 15-year-olds are. But he was actually like, 'I'm really proud of you, Nai,' and it just so touched me!

Do you know yet if we'll see you return to the Pirates of the Caribbean series? Tia Dalma's character is so rich and fascinating, and it's clear this franchise will just keep going as long as it can, so it seems possible.

I don't know, because I got a call from someone on the production team while they were filming and they asked me to do some lines -- some Tia Dalma lines -- for Penelope Cruz. They said that in this one she references her. I haven't seen it to know if she does those lines or not, but I recorded them for her. So I don't know. I thought my character is referenced, which could mean she comes back in 5 but I don't know.

Interesting. We'll find out soon enough! How was your Frankenstein run? You just finished it recently, correct?

Yes! I finished on Monday and then I flew out here on Tuesday to L.A. to start this, so it's been pretty hectic. But it was a fantastic experience.

And it reunited you with Danny Boyle!

Yes -- basically, Danny Boyle gave me my first opportunity in film with 28 Days Later, and I was only nine months out of drama school then. I'm really so grateful to him and I think he's an extraordinary director. And then ten years later -- after I haven't done theater for ten years -- he gives me another opportunity and he chooses me to play this part on the Olivier Stage, which seats 1,200 people, in this fantastic production which was sold out every night and got rave reviews. I feel like he's sort of re-inventing my career for me, a decade later. I'm incredibly grateful to him.