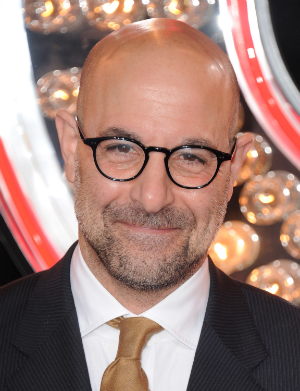 If you thought Elizabeth Banks as Effie Trinket was great casting, wait 'til you find out which character Stanley Tucci has signed on to play in Gary Ross's 2012 adaptation of The Hunger Games. First hint: It's pretty much perfect casting. Second hint: No, it's not Haymitch.

Flickerman's live broadcasts before each Hunger Games allow each tribute to let their personalities shine and grow their fan bases, key to currying favor and winning life-saving favors during the Games. His interviews play an integral part in Katniss and Peeta's relationship on and off the battlefield; expect coy interplay between Tucci and Jennifer Lawrence as he helps Katniss play up her stage persona. Just like he did with Cher in Burlesque!

And since Caesar's a prominent symbol of the Capitol, where privileged image-obsessed citizens dye themselves garish colors and stay surgically young forever, expect to see Tucci made up like a MAC addict in sparkly costumes. Just like Cher in Burlesque!