Kat Dennings on Thor, Her Black List Script, and Her Most Brutal Role to Date 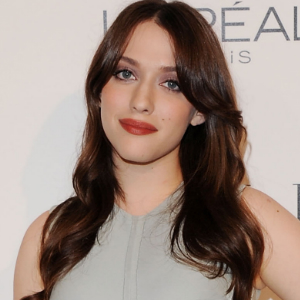 Forget the brawny gods of Asgard; as Darcy, the sardonic college intern to Natalie Portman's frazzled-but-gorgeous astrophysicist in Thor, Kat Dennings has the weight of the film resting on her shoulders. Her snappy one-liners bring the comic book adventure down to Earth, grounding the high-flying tale of a super-powered cosmic prince (Chris Hemsworth) with a real world skepticism that reflects that of the audience.

24-year-old Dennings (The 40-Year-Old Virgin, Nick & Norah's Infinite Playlist) is perfectly cast in Thor as the eyebrow-raising sidekick assisting the nerdy, driven Jane Foster (Portman) and Dr. Erik Selvig (Stellan Skarsgård) on a data-gathering trip to rural New Mexico, where abnormal disturbances turn out to be the result of inter-planetary travel activity. When a hot but clearly disoriented and potentially dangerous blond man appears in the middle of nowhere, Darcy tasers him into submission while Jane makes googly eyes; when S.H.I.E.L.D. agents raid their research lab and take everything in sight, Darcy laments the loss of her iPod. She's a product of generational apathy, distilled down to its most hilariously cynical bits; she is many of us in the audience.

Movieline spoke with Dennings about her involvement in Thor, managing expectations for future Thor sequels, her close friendship with co-star Portman, and the status of three upcoming projects: Daydream Nation, which pits her in a love triangle with Reece Thompson and Josh Lucas; Renee, a psychologically taxing drama based on the life of troubled 19-year-old Renee Yohe; and Your Dreams Suck, the 2008 Black List script Dennings co-wrote with brother Geoffrey Litwack.

You've been modest about your work in Thor, playing it down in the media, when in fact you provide the film's very important comic relief.

Oh! Well, I don't know. I'm just really grateful, honestly, to be in a movie like this, with the people that are working on it. I'm just really surprised that I didn't get cut out. [Laughs] But, yeah, just really excited about it. It's not like Darcy was in the comic books so I can't really say if she's coming back. I don't know, if she's needed, then absolutely I will. But yeah, the other characters are built in, have a fan base, and have a history, so I don't want to put my foot in my mouth and say something that doesn't pay off.

What kind of purpose do you see Darcy fulfilling in the film, especially in contrast to Natalie Portman's Jane?

Jane is a scientist and deeply passionate about that, and Darcy isn't really that passionate about anything, but she just loves Jane and wants to help. So she's sort of an eager little puppy but also really bored and really lazy.

She's also the closest character the film has to an audience stand in, commenting on the silliness of Thor's Asgardian traits on Earth to beat the audience to the punch.

Yes, that's exactly how I look at it! She's the one who says what the audience is thinking, and that's really fun to play with. And if you say it, then it's out and [the audience] can stop thinking it. So having someone in the film say it takes any air out of the impulse for other people to say it.

That goes for Thor's cocky, godly swagger -- he's used to being feared and respected and making demands -- and, of course, for those abs, which you get to ogle, which is what we've all been doing from the other side of the screen.

Yeah. It's pretty amazing! But don't kid yourself; that is hard. The discipline, and also to work out for the hours that [Chris Hemsworth] worked out while also being Thor in the movie Thor. So he'd be shooting all day and then he'd go to the gym for hours at night.

So I'm guessing you had it a lot easier.

Oh yeah, I didn't have to do anything! But that was really hard. And he's so energetic and so upbeat and so much fun. He could have been a jerk if he wanted to, but he was such a good guy.

You and Natalie were friends coming into Thor; how did you first meet?

We met on the set of my friend's music video, actually, two or three years ago. It was called "Carmensita," by Devendra Banhart. He's one of my best friends. I was hoping to work with her, and then it happened!

This year in particular we've gotten to see the lighter side of her, and that continues in Thor.

Absolutely. She's hilarious! She's so wickedly funny, and people haven't gotten to see that side of her until now.

So you two have known each other for a while, and you're out on location together in New Mexico. What do you do in your down time?

Oh my God, there was so much goofing off. There was a lot of, I'd be sleeping, the phone would ring and it would be Chris like, 'Meet me downstairs in five,' and I'd be like, 'Oh, God!' I'd get up and we'd go to breakfast. There were a lot of tired breakfasts. That was the story of our lives. We had the best time.

You mentioned that since you shared most of your scenes with both Natalie and Stellan [Skarsgård], he was subjected to a lot of girl talk?

Oh yeah, poor guy. Poor guy. I'm so bummed he's not here, I miss him. But he lives in Sweden so that's probably why. It's a little far to drive. But Natalie and I just never stop talking. Never stop talking. And Stellan was in all of those scenes with us -- we'd be talking about boys or something and we'd turn around, and Stellan is just napping in the back seat. Poor guy, with two ridiculous young girls talking about silly things. [Laughs]