Quentin Tarantino Getting Unchained For His Next Film 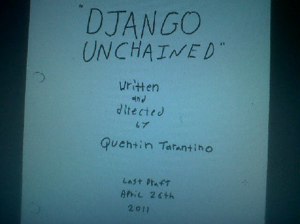 The developing Quentn Tarantino project alternately described as a spaghetti Western and/or, in Uma Thurman's description, a "Southern," appears to have a completed script, a partial cast attached, and now a title that will take us all back a ways.

Tweeter @AgentTrainee has passed along a photo of what purports to be the cover page of Django Unchained, completed this week and handwritten as per Tarantino custom. The title fits the previously reported cast -- most notably Franco Nero, who played the title role in Sergio Corbucci's 1966 spaghetti Western Django. It's not yet clear how Tarantino's film would continue or remake the legend of Nero's gatling gun-packing vagabond caught in a battle between Mexican bandits and the KKK (really!), though a reader at Awards Daily provided a synopsis suggesting the story, set in the Reconstruction-era South, will pretty much stand alone:

The title character Django is a freed slave, who under the tutelage of a German bounty hunter (Christoph Waltz) becomes a badass bounty hunter himself and after assisting Waltz on taking down some bad guys for profit, is in turn assisted by Waltz in tracking down his slave wife and liberating her from an evil plantation owner. And that doesn't even half begin to cover it!

Tarantino reportedly has ambitions to shoot the film this fall, which would line it up just about right for a Cannes 2012 debut. Just guessing here! Anyway, let the title-role casting speculation begin.