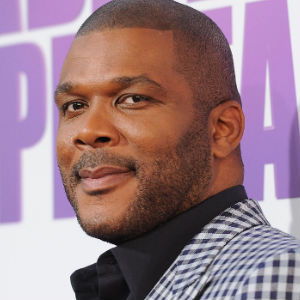 Judging from his press conference for this week's Madea's Big Happy Family, Tyler Perry hasn't yet received a fruit basket of peace from famous detractor Spike Lee. "I'm so sick of hearing about damn Spike Lee," Perry announced to press Monday. "Spike can go straight to hell!" Tell us how you really feel, Tyler!

Perry's argument with Lee dates back to a 2009 interview in which Lee referred to Perry's films as "coonery buffoonery;" Perry responded publicly on 60 Minutes, admitting that he felt insulted by Lee's comments. And while two years and three films have come to pass since then, Perry's still on the defensive when it comes to his Madea films in particular.

"I don't even understand it," he continued. "There [are] so many people who walk around, and this is where the whole Spike Lee [issue] comes from -- the negativity, 'This is Stepin Fetchit,' 'This is coonery,' 'This is buffoonery' -- and they try to get people to get on this bandwagon with them, to get this mob mentality to come against what I'm doing."

Perry points to the disparity between the amount of criticism he receives for his work and the seeming lack of complaints about other similarly ethno-centric film and television properties. "What they don't understand is this, and this is what I want to make perfectly clear to everybody, especially black people: I've never seen Jewish people attack Seinfeld and say, 'This is a stereotype.' I've never seen Italian people attack The Sopranos, I've never seen Jewish people complaining about Mrs. Doubtfire or Dustin Hoffman and what they were doing in Tootsie. I never saw it. It's always black people, and this is something that I cannot undo." [Ed. note: Perry may have gotten his Mrs. Doubtfire/Tootsie reference confused; perhaps he meant the cross-dressing community?]

Having opened ten feature films to $520 million at the domestic box office and created two popular sitcoms in just six years, Perry's reach as a filmmaker is undeniable. But he's ready to challenge the perception that his audience is narrowly defined by ethnic terms. "They go on to say that people of other ethnic groups or white people don't go see my movies, and that's all a lie. I'm standing on stage looking at thousands of people, thousands of faces, with every race represented, and I'm tired of it. I'm tired of just laying down, tired of just being nice and letting them say whatever they want to say however they want to say it without people knowing what the intent really is."

Perry can test his theory this Friday when Madea's Big Happy Family opens nationwide -- sans pre-release press screenings, as per Perry's usual policy. Will the Madea-curious venture into theaters to see if they're on Team Tyler or Team Spike? Has Perry's public stature increased among the uninitiated thanks to the profile boost from bringing films like Precious and For Colored Girls into awards season contention? Sound off below.